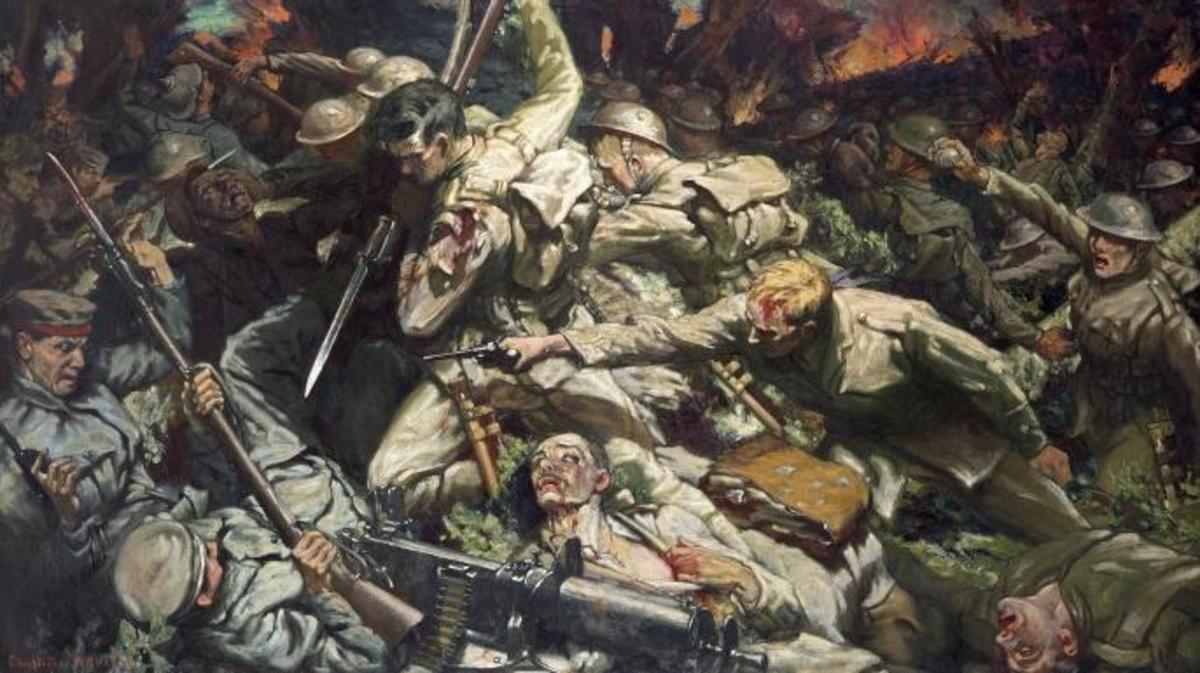 As we commemorate the 100th anniversary of the end of World War I, an often unremarked consequence of the war is the major demographic ruin Western European nations inflicted upon one another. This is just an example:

"This has got to be one of the most powerful photographs I have ever seen. Above is a battalion of the Cameron Highlanders in 1914, prior to being despatched to the front line; below is the same battalion upon their return in 1918 after the armistice. "
Gerry Burns fb page. pic.twitter.com/1aL6ZdD4ug

In the top photo, we see hundreds of young men who went off to war in 1914. In the bottom photo, we see that only 28 men returned.

An entire neighborhood in England saw its young men decimated:

The impact of the First World War in some British towns was nothing less than catastrophic. This photograph is an area of houses in Grimsby, Lincolnshire. Each poppy represents someone that did not home after Armistice Day. pic.twitter.com/F3CWtJJcP1

Here is another tweet that places WWI in perspective:

The picture is even darker when you look at the proportion of deaths among young men. I think in France, among 18-25 year-olds, more than 25% died during WW1. Imagine that 1 out of every 4 young men you know suddenly died and it will give you a sense of the bloodbath. https://t.co/5lpKttekgw

Ann Coulter summed it up:

90+% of the deaths were of each country's strongest & bravest men. Today's Europeans are disproportionately descended from the Eunuchs who didn't fight. https://t.co/ulUykDqdwK

Nations like Germany, France and Britain are still to this day paying the price for the demographic ruin they inflicted upon each other in the Great War.

In just one battle, the Somme Offensive, Britain, France and Germany lost a combined 1.2 million men. In the Battle of Verdun, over 800,000 men lost their lives.

Countries do not simply lose almost an entire generation of young men and remain the same. They suffer the consequences long into the future.

In the normal course of things, “survival of the fittest” is the rule. The process of natural selection ensures that the strongest and fittest rule the gene pool and reproduce.

But if a great war wipes out most of a nation’s best young men, the whole process is turned on its head. The Great War not only robbed Western Europe of a generation of great young men, but also robbed it of future generations of great men.

This could explain why the British Empire declined and faded away so rapidly: on the eve of WWI in 1914, Britain was unquestionably the world’s preeminent power. At that time, the sun still never set on the British Empire and the Crown had colonies and territories on every continent. From India to Australia to Canada to Egypt, Britain quite literally ruled the world. But that was the peak. Within a generation from the end of World War II, Britain’s empire was gone:

This gif shows the rise and fall of the British Empire from 1492 to 2007, and you can clearly see its rapid decline following the end of WWII.

This happened for a reason:  Britain had lost most of its good young men in the World Wars. They lost their future.

Britain, France and Germany today are shells of what they were in early 1914. The reason? They robbed each other of their demographic futures in the terrible battles of the First and Second World Wars.

The crumbling nations you see today are direct results of the unimaginable human devastation they wrought upon one another a century ago.