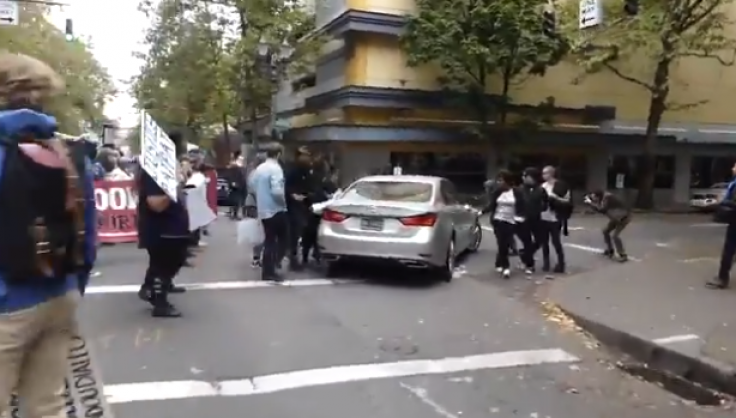 Leftists have ruined another great place:

The video is somewhat long, but the gist of it is that Portland is covered in feces, infested with druggies and teeming with hordes of Antifa scum.

Portland’s pussy of a Mayor Ted Wheeler has completely lost control of his city. Human waste contaminates the streets, gaggles of insane leftwing mobs block off streets and prevent commuters from getting to work (pictured above), and the homeless are on every block.

Portland is a city that has lost control. The forces of civility are decency have lost, and the barbarians have won.

It’s a very scary thing for the normal, civilized folk when their government has lost control of the city. People simply commuting to work in the morning find streets blocked off by shrieking protesters, and you can’t even take a drink from a public water fountain because junkies use them to wash off heroin needles.

On top of this, the Mayor regularly orders police to stand down when Antifa are disturbing the peace and harassing passers-by.

When you live in a big city, you only walk out your front door every day because of your underlying assumption that things are under control. You have that assurance in the back of your mind that the dregs of society—the killers, gangsters, junkies, hobos, terrorists, etc—are not running rampant. You want to know you’re not going to get attacked on the subway, or poked by a dirty needle, or accosted by a crazy person.

But now, civilized folk are on the run in Portland. The inmates are running the asylum.

It’s not just Portland, either. Leftists have ruined San Francisco as well.

In many of these cities, it’s not even so much about which political policies anymore (although bad leftists policies are the main reason things have gotten so bad), but about something far more basic and essential: whether those seeking political office can reclaim their cities from the barbarians that have taken over.

Policies take a backseat when the main question in a city is, “Can citizens even live normal lives here anymore?”

Liberal politicians are talking about banning straws and plastic bags while their cities have become almost unlivable for normal people.

If you watch the video above–and you really should–you’ll see some of the mentally insane denizens of Portland starting around the 7:30 mark. These people do not belong on the streets. They belong in mental asylums and restrained in straitjackets, away from the civilized folk.

The worse our cities become, the less people are going to like the solution. If things continue spiraling out of control, it will take genuine authoritarians to come around and clean things up. The more out of control things get, the messier it will be to get things back under control.

We don’t want a strongman to come to power and institute martial law, do we? Well, unfortunately the worse our cities get, the more likely it becomes that the civilized folk, made increasingly desperate by the chaos and lawlessness, turn to a strongman.

Cities like Portland and San Francisco need hardass rightwing police chiefs to run for mayor on platforms emphasizing law and order and reclamation, like now.

And it’s not just America where the cities are being overrun by barbarians. I recently visited Frankfurt, Germany and walked through a neighborhood not far from the main center of town that was almost completely overrun by migrants and lowlifes. The streets were filthy, the buildings sprayed over with graffiti, the covered with trash and empty beer bottles, and you generally felt unsafe while walking around. I tried to take a picture of one of the worst streets when a group of migrants saw me and started yelling “FOTO! FOTO!” at me, so I got out of there as quickly as possible. This was all I was able to get:

It’s a little blurry but you can see just how bad things look.

I was at a bar and the bartender had recently moved to Frankfurt from Poland, and he was quite blunt about the state of the city: the migrants were ruining it. He said his ex-girlfriend couldn’t stand the city and left because there were “too many migrants”.

This is because of open borders policies.

Portland, San Francisco and Frankfurt are what happens when leftists are in power. The lowlifes always take advantage of bleeding-heart “compassionate” leftist policies.

London, with its rising crime and rampant acid attacks, has been ruined by open borders and soft-on-crime leftism, as has Paris.

We normal folk just want law and order. I think this is a lot of what Trump was getting at in his campaign.

In his inaugural speech he mentioned “American carnage” and was panned by the media. The media live in posh neighborhoods in DC and New York so of course they wouldn’t know shit. But so many of our cities are really messed up.

Part of me wonders if this is just the inevitable result of our increasingly urbanized society and world. Big cities are the norm now. The story of the past 150 years has been one of increasing industrialization and, as a result, urbanization. The industrial revolution completely changed the way society is organized. No longer do we mostly live on farms and in small villages; we now gravitate to highly-populated urban areas where all the jobs are. In 1800, 94% of Americans lived in rural areas and just 6% lived in urban areas. By 1990, only 25% of Americans were in rural areas, while 75% lived cities. That is a massive, massive break from historical norms (going back to the dawn of human civilization) and it has taken place over a relatively short period of time in the context of history (i.e. the past 5,000 years or so).

It has taken place all around the world, too:

Maybe crime, disorder and depravity are unavoidable parts of living in a big city. Bigness–in cities, institutions, organizations, etc.–breeds a lack of accountability. When there are too many people in one place, everyone gets lost in the shuffle, and the miscreants take advantage of the anonymity and chaos.

But a large part of the reason so many formerly-great Western cities have gone to shit is because the leftists in charge have lost control.

Sooner or later, the civilized folk will stop tolerating all the madness and chaos. The longer we wait, the uglier the process will be.

0 comments on “The Civilized Folk Have Lost Control”