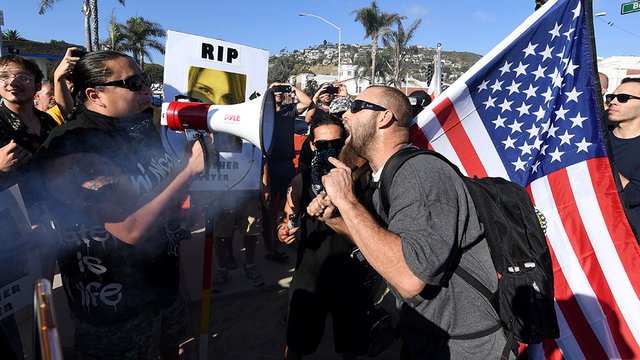 We need a media that is responsible and dedicated to spreading truth, squashing lies, maintaining order, and promoting national unity based on a shared truth. Unfortunately, our “mainstream” media does none of this, and in fact actively squashes truth, spreads lies, promotes disorder, and foments tribal resentments.

This was a good read from ZMan blog. The title of the post was “The Coming Violence”:

“Rulers have always understand that general discontent among the rabble is like dry underbrush. It only takes a spark and you have a forest fire. In the case of civil unrest, a simmering discontent in the community, or among a sub-group, can quickly turn into a riot. The Rodney King riots in 1992 are a good example. The black underclass had developed a deep hatred of the cops, so when the cops were acquitted, that was the spark that set off the ghetto riot.”

The underlying and building tensions are there in America.

Things can get out of control quickly. Seemingly normal one day, chaos the next. Most people won’t see it coming.

“Whether it is the seemingly incoherent and ad hoc violence of a bar fight or sports melee, or a person or group committing social violence, the actors arise from predictable conditions and act quite rationally. There is a degree of predictability to their actions, if you’re willing to notice. It’s why bouncers in bars keep an eye on the males competing with one another for females. It’s why sports referees look for guys getting agitated and send them off the field to cool down and get their head back in the game.

In modern America, there does not seem to be anyone in charge willing to play the role of bouncer or referee. Instead, the people in charge are like the guy with the stick in old-time bare knuckle fights. They are trying to get the combatants to go at one another, rather than keep them under control. The deployment, tolerance and protection of Antifa, for example, is a deliberate provocation. The people in charge not only hope these idiots hurt someone, they hope white men will defend themselves so they can be railroaded by the courts.”

This is the key point: our media is not playing the bouncer role. Our media is too partisan to do so.

“In a multi-racial society, where the old majority is being swamped by former minorities and those former minorities are told they must hate the old majority. The atmosphere is nothing but kindling. A prudent ruling class would be acting as firemen, hunting down anything that looks like a spark, over- reacting if necessarily, in order to prevent a blaze they may not be able to control.”

What’s funny is our media has referred to itself as firefighters running toward the danger and saving us all. But the job of a firefighter first and foremost is to put out the fire.

And it’s also never the case that the firefighters set the blaze themselves the way our media largely has.

Right now, the two sides in America loathe each other more than ever. There is no trust between the two sides; no assumption that the other side is operating in good faith. We’ve largely given up on trying to overcome our differences and come together as a nation. Most of us don’t even want to.

Quite simply we’ve given up on one another. We have come to terms with the fact that we will never get along. This is a major turning point in our history.

It feels like not insignificant numbers on both sides are itching for a fight. They want the violence.

Worse, our national media has not only totally abdicated its responsibility to debunk lies, and maintain order like a “bouncer” would at a nightclub, it is actively and deliberately spreading lies and propaganda to provoke people into resentment, hysteria and violence.

On everything from supposed police racism to “toxic masculinity” to Trump being a fascist dictator, our media is fabricating a narrative of a nation that brutalizes and oppresses women and minorities

And, wouldn’t you know it, many women and minorities (and their wannabe saviors, aka white liberals) believe the lies, and are acting accordingly.

The media has millions of people living in an alternate reality. This will not end well.

For the first time in my life I really do believe this country is in trouble. I genuinely afraid of what the future holds. Societal breakdown is a real possibility.