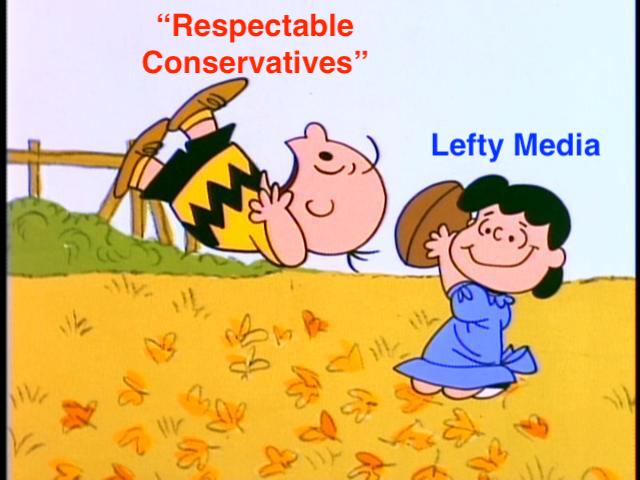 Respectable conservatives desire nothing more than to pass the bad faith tests of their opponents https://t.co/GteAqFfcc8

This is the perfect encapsulation of NeverTrump.

Every time I would see a Jeff Flake tweet about Trump, or Brett Kavanaugh, or whatever else, this is what it felt like. It felt like I was watching an insecure coward desperately trying to pass the bad faith tests of people who would never truly accept him.

The left entices the NeverTrumper into subservience with the promise of deeming him A Good Person so long as he passes their moral tests.

Furthermore, for some reason, these “Conservatives” cede the premise that it is leftists–the same leftists conservatives of days past consider depraved, degenerate and immoral for their stances on abortion, gay rights, family values, religion, etc.–who are the ones that get to determine Who Is Good and Who Is Bad.

Another tweeter adds on to Greer:

their biggest fear isn't being shot down by a gangbanger, blown up in a terror attack, or being killed in a hit and run by a drunk illegal

The most important point is that the left is totally cynical and disingenuous about it all. All their supposed “moral tests” are done entirely in bad faith.

It’s not about “collusion with Russia,” because if anything, Hillary colluded with Russia.

It’s not about graft because Hillary and Bill are the king and queen of graft.

It’s not about racism because anti-white racism is rampant on the left.

It’s about putting you in a box.

The left devises all these moral tests over made-up “issues” because they want to be able to control you. NeverTrumpers are more than happy to oblige.

0 comments on “The Perfect Description of NeverTrump “Conservatives””