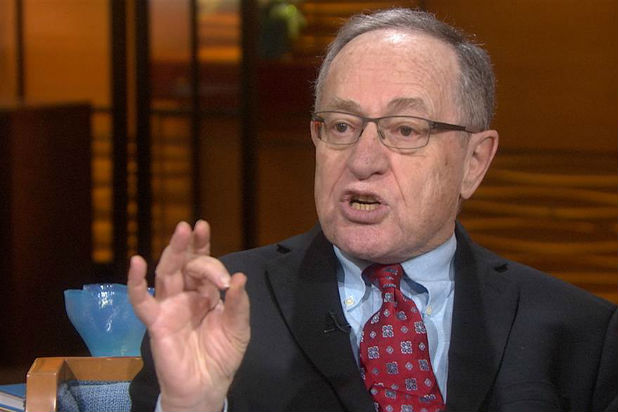 You may have heard recently about the claims against Alan Dershowitz, the Harvard law professor who has emerged as one of President Trump’s legal defenders. Dershowitz has been fantastic in exposing the corruption and treachery of the Mueller investigation and the whole witch hunt which is currently making a mockery of our legal system and turning America into a police state before our eyes.

So of course it was only a matter of time until The Powers That Be attempted to destroy Dershowitz’s reputation and career. The allegation was that Dershowitz had an ongoing sexual relationship with an underage girl at billionaire pedophile Jeffery Epstein’s South Florida island estate.

The claim was a total fabrication. Fortunately, Dershowitz fought loudly and relentlessly against the despicable attempt to defame his good character. He has not only denied but disproved the claims against himself and protected his good name:

After leveling these claims in detail, you say that I “vehemently denied the accusations.”

Not only did I deny the claims, I conclusively disproved them. I produced my travel, phone, credit card, and TV appearance records conclusively proving I could not have been and was not in any of the places Roberts claims I was during the time that she knew Epstein. The former director of the FBI, assisted by a former assistant U.S. attorney and a chief federal marshal, reviewed these records and the other evidence and concluded that “the totality of the evidence found during the investigation refutes the allegations.” The judge struck Roberts’ affidavit and sanctioned her lawyers for filing it, and her lawyers then withdrew their accusation admitting that it was a mistake. After reviewing the evidence, ABC News canceled their plan to show an interview with Roberts because she was not credible.

There is other evidence, currently under seal, that directly establishes my innocence. I am seeking to unseal emails between Roberts and a journalist, a book manuscript by Roberts and a legal brief that are smoking guns showing that I was “deliberately framed for financial reasons.”

Financial and political reasons. But Dershowitz doesn’t want to open that can of worms apparently. That’s his choice.

The only reason this is happening to Alan Dershowitz is because he has become one of President Trump’s most capable defenders. He’s consistently called out the bullshit claims against Trump–from “obstruction of justice” to “collusion” and others–and is now being punished for his defiance of the Deep State.

There is no other reason.

Had Dershowitz remained a partisan liberal Democrat, he would have never been hit with these false accusations of being a sex criminal.

Of course, when it came to allegations against Dershowitz, the media chorus was that we must #BelieveWomen and presume Dershowitz’s guilt.

It was a different story when #MeToo allegations came out against famous lefty #Scientist Neil DeGrasse Tyson:

It’s amazing how shamelessly they flip the BELIEVE ALL WOMEN/Demand Evidence switch based on whether the target is a Republican or a Democrat.

The bottom line, as we saw with Brett Kavanaugh and even Donald Trump during the campaign, is that when you become too big of a problem for the Establishment, they will simply frame you for sex crimes in an effort to destroy you.

This is the sort of thing that was normally confined to authoritarian police states like Putin’s Russia, but has now become more common in America.

Combined with the Mueller witch hunt–an Establishment-ordained impeachment mission designed from the outset to destroy this #problematic presidency; a punishment in search of a crime–it is now clear that we are living in a country hardly even resembling our idea of America.