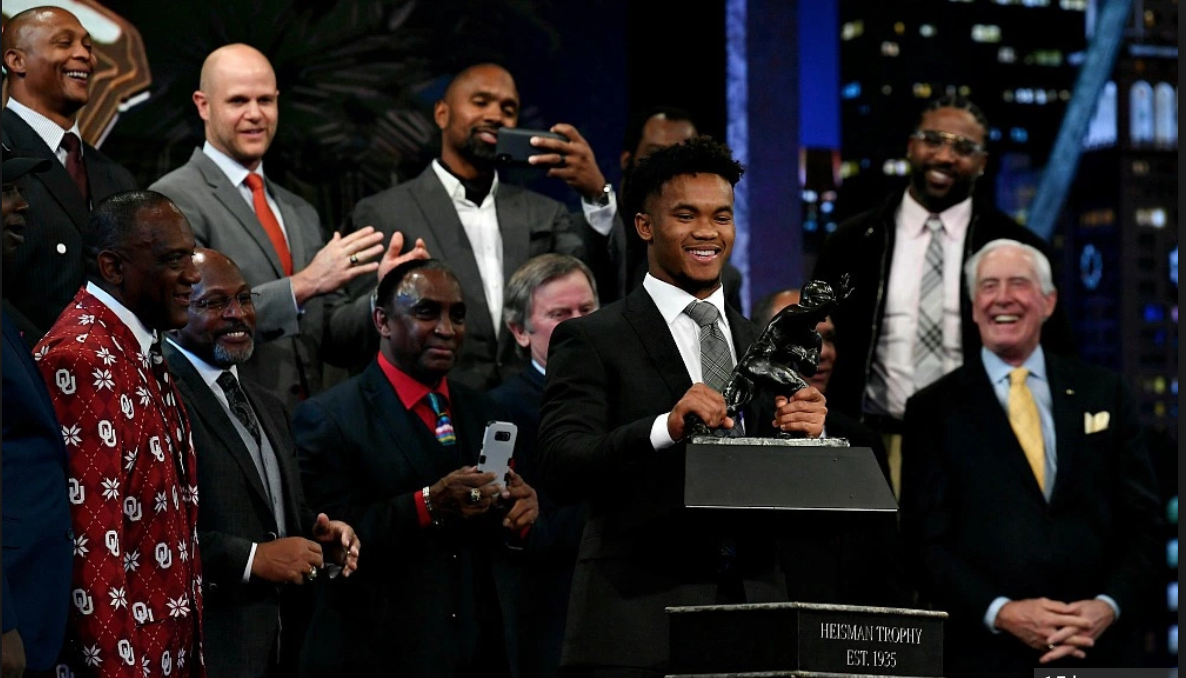 Last night, Oklahoma QB Kyler Murray won the Heisman Trophy, awarded annually to college football’s best player. It’s perhaps the most prestigious award in all of American sports and a tremendous honor to even be named a finalist for it.

So of course liberals had to ruin it, like they do everything:

Almost immediately, some little punk-ass bitch nobody reporter named Scott Gleason from USA Today began scrolling through Murray’s old tweets from when he was 15 and, to his horror, found four that were HOMOPHOBIC!!!

I’m not even going to discuss the tweets themselves because they’re so unimportant. I don’t care what they said, but from what I gather Murray must have called one of his friends a fag, or gay or something.

The liberal media truly is the enemy of the American people. They waited until Murray won the Heisman, and only then combed through his old tweets to find some they could get him in trouble over.

Why were they so determined to try to ruin his moment? Why didn’t they do this earlier in the year? After all, he’s been a star quarterback all season long.

They just have to ruin everything. Their obsession with power means they have to involve themselves with everything. It’s about asserting dominance. It’s about showing you they can take you down if they want.

No normal, well-adjusted American gives a shit that Kyler Murray used the word “fag” when he was 15.

Also, no normal, well-adjusted American considers the word “fag” a “gay slur.” It only became one in the last few years.

Fag is just an insult. It’s like calling someone a pussy or a bitch.

But in the past few years the PC Left has decided that the word fag is the n-word for gay people. And then they also said that anyone who used the word fag before they redefined it was guilty of HOMOPHOBIA.

You are guilty of Thoughtcrime if you failed to follow their 2018 rules back in 2012. It’s supposed to be confusing and capricious. It’s by design.

This is why the dishonest media is the enemy of the people.

On a related note, just a couple days before the liberal media came after Kyler Murray, they went after Kevin Hart for some stuff he said about gay people in the past. Hart was slated to host the Oscars in a few months but the left put a stop to that.

Why does the Woke Left hate to see black men succeed?

So in response, Nick Cannon went back through the tweets of some of today’s Wokest white liberal females and, wouldn’t you know it, they too used the word fag as a general insult way back in the pre-Woke days of 2010.

Wow. So the instigators and leaders of today’s liberal lynch mob are total hypocrites? Who would have guessed. I’m shocked–shocked–to learn that their politically correct outrage is disingenuous.

These Woke Hollywood Bitches who are frequently observed trying to ruin other people’s lives for being politically incorrect are in reality just as guilty of Thoughtcrime as the rest of us.

When the left decided that dissent was completely intolerable.

At some point in the last few years, politics became so critically important and so central to American life that it began to come before everything else.

“Kyler Murray wins the Heisman! But wait, we have to first make sure he’s sufficiently Woke and Loves Big Brother.”

Maybe I was just young and naive but I feel like it wasn’t like this 10-15 years ago. Politics didn’t dominate sports and entertainment like it does now. A guy could win the Heisman and nobody tried to dig into his past to see whether he had ever committed Thought Crime as a teenager.

A guy could host the Oscars and his personal views on politics were unimportant. We used to be able to separate people from their politics. But now politics comes before everything.

This is not how healthy, unified societies do things. This is how countries fracture and die. This is how fascist dictatorships are run: fealty to The Party is the most important thing in national life. There is no escaping politics.