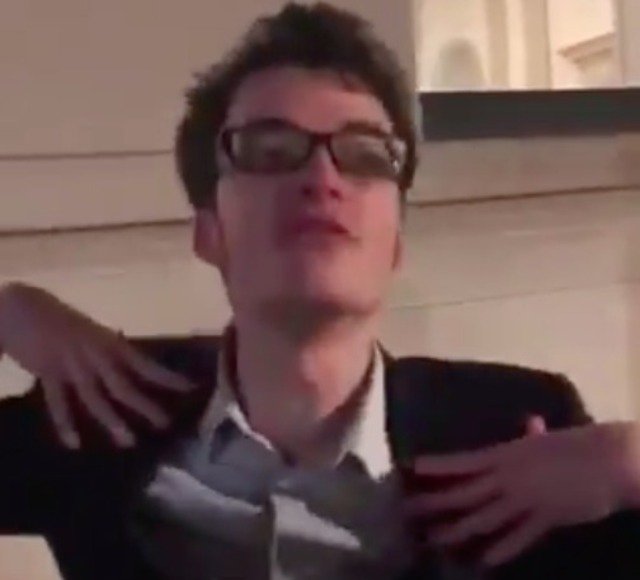 A COLUMBIA UNIVERSITY STUDENT WAS RAAAAAACIST!

I repeat: A WHITE STUDENT AT COLUMBIA UNIVERSITY WAS RAAAAACIST!!!!!

This story is so unbelievably important, You Guys:

A Columbia University student was filmed harassing people while ranting about white supremacy.

Columbia University is investigating a “deeply disturbing racially charged incident” involving a student yelling at classmates, “White people are the best thing that happened to the world!” https://t.co/pJUBj7qwTy pic.twitter.com/lA4UfZUL6t

‘I love white people!’ — This Columbia University student harassed a group of mostly Black peers by lauding white people at the top of his lungs pic.twitter.com/PDgDfN55TB

NBC News has more on this horrific and unspeakable crime:

“A white student at Columbia College in New York was seen in a video yelling at and berating a group of mostly black undergraduates, telling them white people are the “best thing that ever happened to the world.”

The video, which has now gone viral and sparked backlash from social media users, showed the young man, whom a college newspaper identified as a student, outside the school’s library early Sunday morning screaming: “Europeans built the modern world.”

It also prompted a lengthy response by undergraduate deans at the college, part of Columbia University, denouncing racism.

“We are alarmed at the rise of incidents of racism and hate speech in our world today,” the statement read. “It is more important than ever that we continually demonstrate our core values and restate our commitment to a diverse, inclusive community on campus. At Columbia, we stand firmly against white supremacist language and violence.”

During the nearly minute-long tirade, the student is seen yelling remarks many on social media have deemed racist and offensive.

“We built the modern world,” said the student, identified by the school’s newspaper. “We invented science and industry, and you want to tell us to stop because oh my God, we’re so bad. We saved billions of people from starvation.”

He continued: “White people are the best thing that ever happened to the world. We are so amazing. I love myself, and I love white people.”

Um, I don’t see any quotes of him saying anything racist about other races, but I guess being proud to be white is racist and newsworthy.

If he was “berating” the black students, we’d at least have some quotes of what he said to berate them, but I don’t see anything negative about black people.

Of course, there’s no mention in any of the stories about what actually spurred this young man to start yelling about whiteness. The Dem media is probably hoping you just assume RACIST WHITE PEOPLE randomly often run up on black people and start screaming “HU-WHITE POWER!” in their faces totally unprovoked.

I’m almost certain his drunken rant (the video was taken “early Sunday morning”) was spurred by harassment from the black students, as we are given no context or backstory. The media is probably trying to downplay this aspect because it does not promote their narrative of Dangerous White Racism Run Amok In America. Anytime there is a conspicuous absence or deficiency in a media story, assume it is by design.

In other words, if you’re wondering, “But what caused the white kid to do this???” assume that the media would rather us not know.

Otherwise they would have told us. If it bolstered their “Evil Whitey” narrative, we would be well aware of it.

The Democrat media wants the story to be solely about A WHITE PERSON BEING RACIST.

Because that is so incredibly important.

Have you noticed that our media gives more negative coverage and attention to (real or perceived) instances of WHITE RACISM than it does to crimes like murder and rape?

Seriously. People care more about whether a random white person from across the country SAID SOMETHING RACIST than whether someone in their own city was murdered. Alleged RACISM gets more attention than murder in America 2018.

Did you know that in Mishawaka, Indiana, a high school football player was just arrested for stabbing his pregnant girlfriend to death and tossing her body in a dumpster?

Probably not, because the media would rather highlight a RACIST WHITE GUY SAYING RACIST WORDS.

I’m sure their answer won’t surprise you.

This, too, is by design: the media largely sets our priorities by deciding which stories to focus on and which ones to ignore.

In America 2018, murder is more forgivable and less noteworthy than RACISM.

The Dem media will have you believe that it covers White Racism so obsessively because if left unchecked, White Racism will inevitably lead to another Holocaust, just like it did in Germany in the 1930s. So you see, the Dem media is just being responsible and is heroic for holding the forces of white terror at bay.

Which is why they have to ignore actual murderers to focus on. . . people they believe could one day become murderers. . . because they’re. . . more important. . . than people who. . . are actually murdering people in the present. . .

America is such a racist and White Supremacist country that anytime a white person says something RACIST (or not even racist, just not politically correct) it’s a national news story superseding even stories about rape and murder.

2 comments on “Media: White Racism is Worse Than Murder”