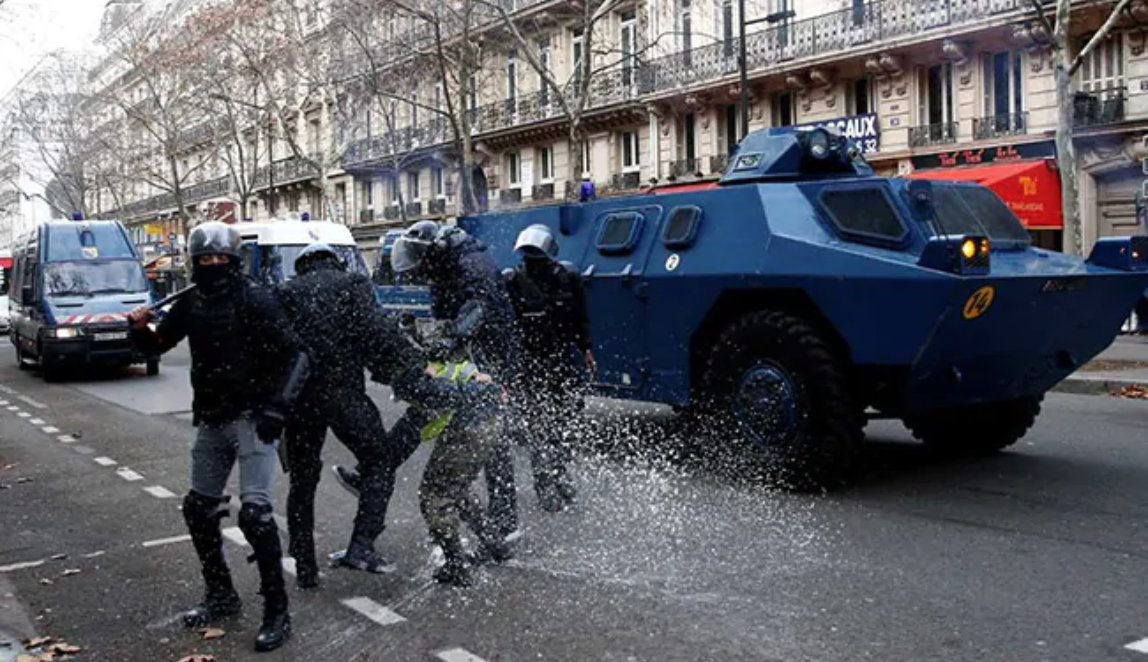 The Yellow Vest uprising in France has taught us that there is only one way to defeat the Western political establishment: violent revolt.

That might sound extreme and shocking, but consider that the cancelation of the gas tax is probably the first time in decades the globalists have actually lost on a political issue.

Every single major issue has gone their way for decades: immigration, trade, healthcare, taxes. Everything. Brexit has gone their way. Trump’s presidency has even gone their way, largely: we all got tax cuts, and that’s great, but the tax cuts primarily benefitted those at the top.

But the gas tax did not go the globalists’ way. They didn’t get their way on that.

And do you know why? It was because they felt fear. Real, physical fear.

I challenge you to name a single policy since the end of the Cold War implemented in Western Civilization (America, Western Europe) that has been either restrictionist on immigration, good for the middle class economically (don’t say Cheap Chinese Crap), pro-national sovereignty, pro-peace, or pro-traditional values.

Except the gas tax.

The French people got the first policy win over the Western globalist elite in decades.

You think this has gone unnoticed? This past weekend, Yellow Vest-style protests spread to Belgium and the Netherlands, as well as Germany.

Why? Because the Yellow Vests protests are working.

For the first time in decades, the forgotten, discontented masses of Western Civilization are actually seeing encouraging results, and it’s through protests and riots.

Back when Obama was President, I used to scoff at Democrats’ claims that our political system was broken. They were just complaining because we were using our minority powers granted under the constitution to stymie their agenda, I thought. We on the right smugly lectured them that the system was working just as it was intended to, and that the Founders wanted us to obstruct our balls off.

But now that they’re obstructing us on everything, I see they had a point.

What’s going to happen to our political system? Is it going to be endless obstruction? Some people are fine with this but consider that without any major legislative changes America will be transformed into a third world nation by way of mass immigration. It will happen barring a major change in immigration policy, a change which can only come through Congress.

Are we fated to simply take turns obstructing one another until demographics win out and give Democrats a permanent supermajority in this country? Because that’s what it seems like.

Eventually it will reach a breaking point.

Eventually people will get sick of never getting what they voted for.

And if you think the violence can only come from the right, you are fooling yourself. The media has been fomenting racial resentments for the better part of this decade and has convinced the now mostly-nonwhite left that they live in a viciously racist country where white supremacism runs rampant and oppresses minorities in every conceivable way.

Doesn’t matter if it’s not true: people believe it’s true. Millions of people. And because of it, they are full of righteous anger.

You saw what happened after Ferguson. Antifa and Black Lives Matter show that the left is increasingly seeing violence as the answer.

But overall here, I’m talking from a right-wing populist point of view. The media always derides us as angry, and eventually we’ll say, “You know what? We are angry. And we’re going to take it out on you and your kind.”

Trump’s election in America has not changed much. We still don’t have a wall, illegal immigration is at a record high, and the media still covers for Deep State criminals who have not faced any accountability for what they did in 2016 pertaining to the Steele Dossier and their abuse of government power to destroy Donald Trump. Nobody answered for Benghazi, nobody answered for Obama’s IRS harassing conservatives. The middle class is eroding and America is turning into a economically stratified nation of rich and poor with little in between.

In Britain, the Brexit vote changed nothing. Somehow, the EU is still in control. In fact, the European Court of “Justice” just ruled that Brexit can be reversed.

So what’s the takeaway? You can’t vote the globalists out of power. It just doesn’t work that way. Even when we win the elections, they still ultimately win. Nothing changes.

“We voted for the Wall.”

“Well, you still can’t have the Wall.”

“We voted for Brexit.”

“Well, you still can’t have Brexit.”

Yeah, it’s a huge mystery why people are taking to the streets.

I see a choice in the coming years between violent uprising and passive submission, and as history shows us, submission won’t happen.

No rotten, corrupt system can go on forever. Sooner or later, discontent boils over.

Again, as I keep saying, I do not prefer violence.

I wish we could get what we want democratically and peacefully. That’s the social compact that this country was founded on. But today’s elites do not believe in democracy. In fact they are actively anti-democratic.

They are not upholding their end of the social compact which states that we do not have to resort to violence and war so long as the results of democratic elections are honored.

They’ll cynically and disingenuously say that talking like this is undemocratic, but what else are we supposed to do when voting accomplishes nothing?

Worst of all, we increasingly can’t even voice our disapproval with the elite. Silicon Valley is making sure of that.

We sit patiently and wait for Republicans in Congress to do something about the fact that Big Tech is waging a digital genocide on right wing voices on social media, and yet nothing is done.

House Republicans dragged Google CEO Sundar Pichai before a committee today and the first thing out of his mouth was that Google is not biased against conservatives:

In his prepared testimony, CEO Sundar Pichai denied Google is politically biased and described user privacy as "an essential part of our mission" pic.twitter.com/lRrx01HtrS

Are House Republicans just hoping some Big Tech CEO comes out and admits it?

What if that never happens, even thought we all know it to be true?

What is the plan then? Do we just accept it as a fact of life that we’re eventually going to be run off of social media, and that Republicans aren’t going to do shit about it?

So what are we supposed to do?

If we don’t stop this, we are finished. Pretty soon the only “right wing” voices permitted to remain online will be the Establishment-approved NeverTrump pussies who represent zero threat to the globalist status quo.

They’ll let us have Ben Shapiro, and that’s about it.

Big Tech will let us have YouTube clips of Shapiro using FACTS and LOGIC to OWN 20-year-old college liberals, and that’s it. They figure that’ll be enough to keep us sated.

But it won’t. Eventually they’ll push us to a breaking point. I don’t know when, but it will happen eventually.

The only way you can defeat the globalists that are destroying Western civilization is to do what they’re doing in France: revolt.

I wish it didn’t have to be like this, but people are not going to simply surrender as their beautiful countries are transformed into vastly-unequal third-world hellholes via mass immigration and job outsourcing by multinational corporations, and while their voices are silenced on social media for daring to express opposition to it all.

“The tree of liberty must be refreshed from time to time with the blood of patriots & tyrants. It is its natural manure.” -Thomas Jefferson, 1787

0 comments on “The Elites Are Making Violence Inevitable”