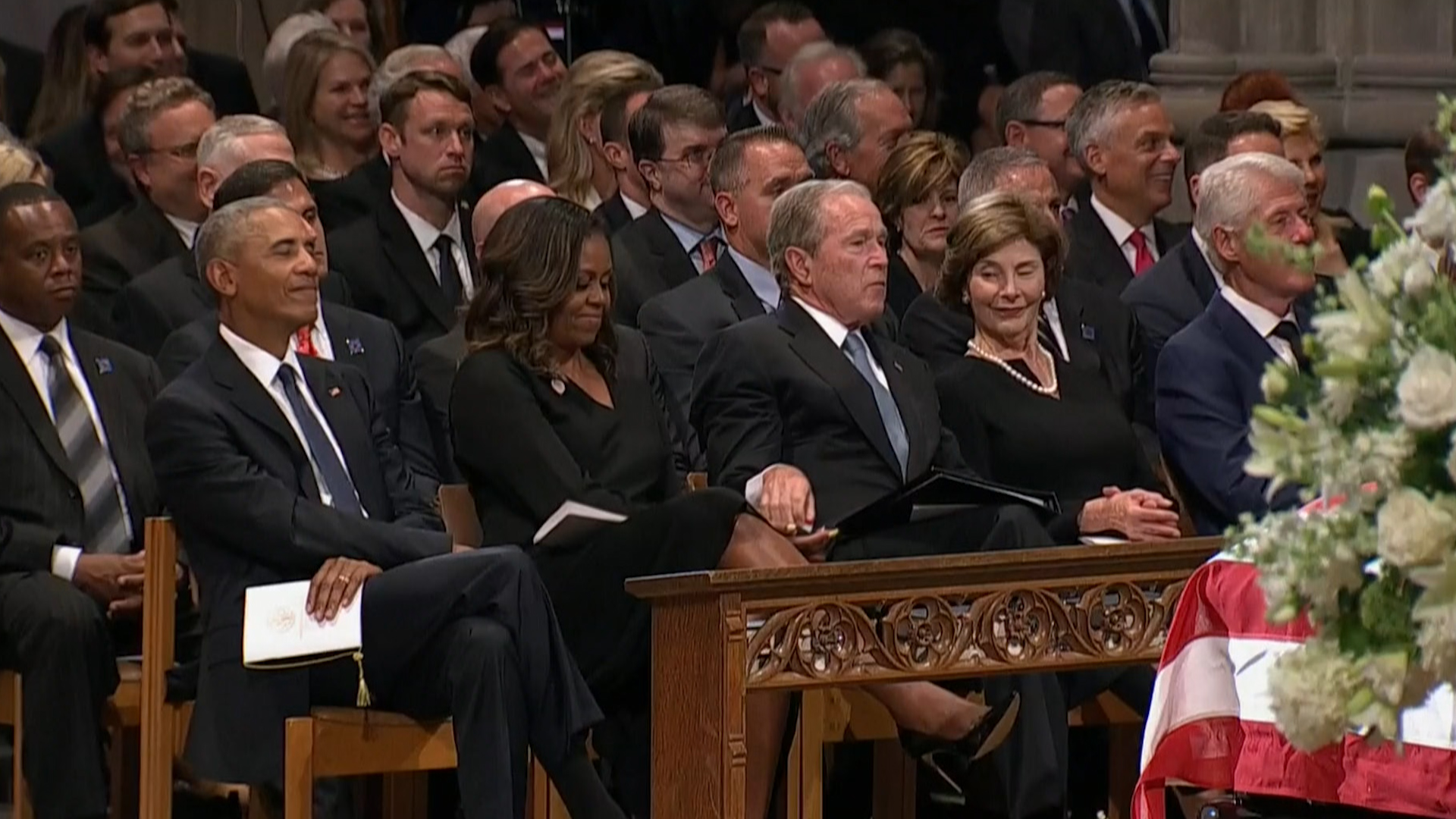 I’m pretty much resigned to the fact that we’re not getting the wall. It’s not just because the Democrats don’t want it but also because most Republicans don’t want it. Republicans—at least those that haven’t been fully converted to full-on “Diversity Is Our Strength!” cultural leftism after spending years enmeshed in DC—know deep down that we need the wall, it’s just that they rely too much on donations from corporate America and thus will either never allow it or just keep it far down on their priority list (the latter is effectively the former, just a more cowardly and corrupt way of going about it.)

The only thing that can save America is a revolt like we’re seeing in France. I’m pretty much resigned to this fact by now.

I want peace and prosperity and America. I don’t want this country to be turned into a third world hellhole.

I just want what we voted for.

But the Uniparty is determined to prevent us from getting it, and at that point there’s really no other option for us, is there?

What is the last resort of people who are continually trampled and abused by their supposed public servants, who in reality have become rulers? When the elites have for all intents and purposes killed democracy, there’s only one other option.

We’ve almost lost the revolutionary spirit over the past few centuries because democracy has more or less worked for the vast majority of American history. Elections actually meant something and people had no need to revolt because democracy actually worked. You could actually achieve real, substantial change simply by voting.

But now the game is rigged. The outcome is predetermined. Trump sort of threw a monkey wrench into the Uniparty’s plan of continued dominance and higher profits for multinational corporations by winning the presidency but it turns out the presidency is just one part of the equation. The Uniparty still controls Congress, the federal bureaucracy (especially the Justice Department), and the media, and that’s enough to cancel out having Trump in the White House. They are able to hold him in check.

From the moment Trump was elected, and even before that, the Uniparty has sought to destroy Trump. Their mechanism for doing this centers on the false narrative of “Russian collusion” that they created in order to delegitimize Trump and, more importantly, launch an endless and boundless investigation into him in hopes of impeaching him. They all want it. The media talks daily with hope and delight about “the walls closing in” on Trump. Impeachment is so transparently their prime objective they don’t even really try to deny it.

Republican voters, don’t get mad at Trump. He’s the only one actually on our side. It’s just that it’s impossible for him to actually do what he said he would because the Uniparty is too pervasive and too powerful.

If you want to know what the Uniparty is just look at any image of the Obamas, Clintons and Bushes together. An example is Bush 41’s funeral: the Uniparty was assembled and in full display. The media was gushing. You’d never think the Bushes were Republicans given the way the media was singing their praises. But Trump made the media realize who its real enemy was, and also that the Bushes were basically on their side. Look at how they treated Trump: he was the unwanted guest, the Party Crasher. At least they invited him to 41’s funeral: McCain’s funeral they wouldn’t even let him attend. McCain’s funeral was strictly Uniparty.

Trump was the last best hope of defeating the Uniparty democratically and peacefully. And two years in it’s pretty clear that he is unable to do so.

Eventually it will come to revolt. I don’t know when, but it will. I’m sure of that. Because when voters don’t get what they voted for, they don’t just forget about it and give up. They get even angrier and their discontent with the status quo only gets worse.

Working on Capitol Hill for a member of Congress, I spent all day taking calls from constituents and the one thing I remember is that people were pissed. Super pissed. This was over four years ago and I don’t remember all the issues they called about specifically but the one constant theme was that people were at wits end over not getting what they voted for. Taking the House in 2010 midterms did nothing. Adding the Senate in the 2014 midterms got them nothing as well. They would always ask why the hell they keep giving Republicans more power in Washington and yet nothing changes.

In hindsight I should have seen Trump coming from a mile away after hearing from all those constituents day after day. They were fed up. They were done with getting shit on by Republicans who would promise the moon and deliver nothing. The callers correctly realized there was little difference between the Republicans and the Democrats: no matter who you voted for you always got the same thing. So of course they were going to take drastic measures and go with the outsider candidate to turn Washington on its head.

Those people haven’t just calmed down over the past few years. They haven’t given up. They haven’t simply accepted that they will keep getting the same Corporate-approved, politically correct globalist garbage shoved down their throats want no matter who they vote for.

Maybe they could partly accept not getting what they wanted when the Republicans weren’t in full control of government, but were finishing up two years of full Republican control of the federal government and the people still haven’t gotten what they voted for. This is something they’re definitely not fine with. This is something they won’t tolerate. You can’t tell people who represent the majority that they still can’t get what they voted for. That does not go over well.

And yet somehow the Uniparty still believes the opposite is the case: the people will eventually learn to accept all this. Your country WILL be overrun with illegals and foreigners, your jobs WILL all be shipped overseas or taken by robots, and there is nothing you can do about it.

People can only take getting screwed over so much. They won’t just accept the fact that they’re powerless and don’t have a say in how their country is run.

And why on earth would they ever? They’re Americans for God’s sake. They know the history of their country. They know it was born of revolution and rebellion against tyranny. Sure the Uniparty is trying to erase their history and ruin their past by stigmatizing all their heroes as RAAAAAACISTS, but people still have that sense of American don’t-take-no-shit independence.

We know who we are.

Americans are hardwired to reject tyranny. We just are. This country was founded on the idea that we don’t have to take crap from some ruler. Try as the Uniparty might, it cannot stamp out the American spirit of self governance. It can never turn red-blooded Americans into passive subjects who will simply accept that do not have a say in how their country is run.

People who historically have known nothing but self-governance and freedom will not simply wilt into downtrodden peasants who accept the top-down dictates of their self-appointed ruling class. It’s just not gonna happen.

Sooner or later the Uniparty will push the American people to their breaking point.

This, of course, is a major reason the Uniparty has been working so hard for so long to import an entirely new electorate of foreigners who are more accustomed to obeying a ruling class in exchange for handouts and benefits.

But the Uniparty will fail. I’m sure of this.

So whenever you see Uniparty elites celebrating this victory or that over Trump, just know that one day they will have their comeuppance. Don’t get caught up in the daily manufactured drama of Failure Theater, whereby Republicans talk a big game of finally putting their feet down and doing what they’ve been promising to do for years, yet end up folding at the last minute, giving Democrats everything they wanted and getting no concessions whatsoever. Don’t fall for the act.

It’s simply the Uniparty trying to trick you into believing there isn’t a Uniparty aligned against your interests. The outcome of whatever they were pretending to disagree over was never in doubt. That’s just to maintain the illusion that the parties actually disagree and that there is a reason to continue voting.

Each time they thwart or obstruct Trump, it is only hastening their downfall.

Each time they deny us what we voted for, it only further solidifies the fact that the people will rise up and stop playing their rigged game.

The rules were written down clearly at the beginning: the people will govern themselves. They will not be subjects of a ruling class, in fact just the opposite will be true: the elected officials will be public servants of the people.

But somewhere along the way the whole thing was flipped and the public servants became the rulers while the public became the servants.

And so because the rulers stopped playing by the rules, it won’t be long before the people do the same.

1 comment on “The Uniparty, or: Why Americans are Destined to Revolt”