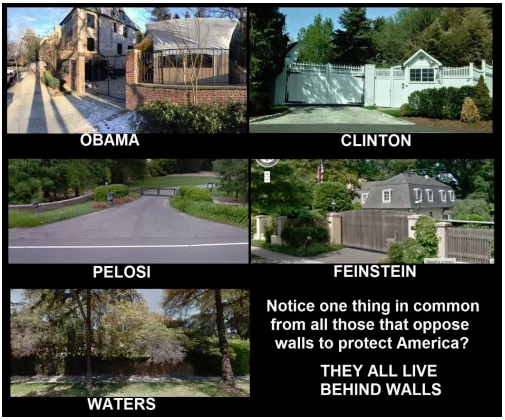 “Walls don’t work,” they tell us from behind the walls of their palatial estates.

Meanwhile, Benny Johnson of the Daily Caller went to the Obamas’ D.C. neighborhood–Kalorama Heights, one of the whitest and richest in the country–to see if the Obamas believe in walls or not. The answer will SHOCK you.

So the street is blocked off by police barricades. The house itself is surrounded by walls.

Johnson brought a tape measure to see if Obama’s house was actually surrounded by a ten foot wall, but it turned out that there were numerous other barricades and walls around the house that prevented him from even getting up close to the main wall around the house.

I’ve been by Obama’s original house on the South Side of Chicago, too. You can’t get anywhere near it. The whole street is permanently blocked off by police barricades. It’s under 24/7 security.

Whether it’s an actual wall or heavy security and police barricades, it’s pretty obvious that our most pro-open borders politicians insist on living behind walls.

But when it comes to putting a wall around America, you will never see them fight against anything with more passion and ferocity.

They want you to live in the multicultural hellhole. Not themselves.

They just want the votes and cheap labor.

You must live with the everyday reality of their “multicultural” dystopia.

0 comments on “Democrats: Our Houses Must Be Protected by Walls, but the Country Itself Must Not Be”