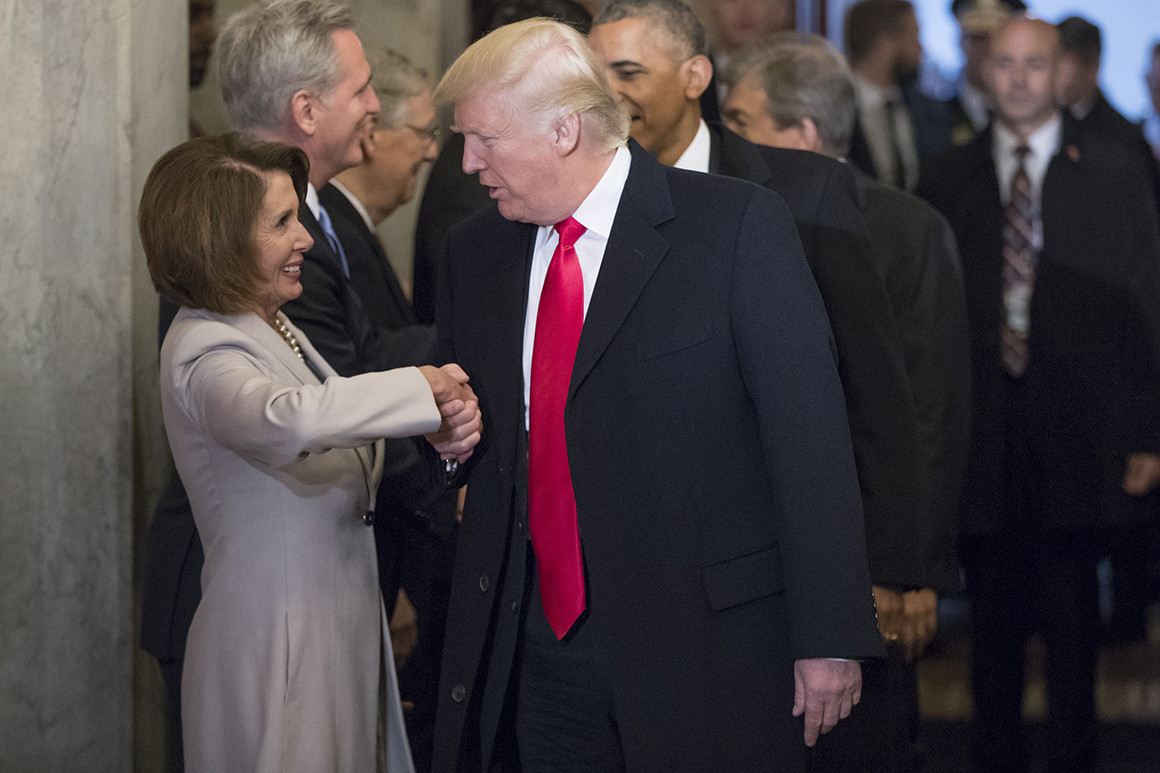 Boy, I’m sure glad Democrats retook the House so they could Restore Civility and Dignity to Washington and prevent Orange Man from destroying our Institutions:

“House Speaker Nancy Pelosi renewed her call Thursday to delay the State of the Union address, saying the date is not “sacred” and President Trump should wait to deliver his message to the nation until the partial government shutdown ends.”

There are two reasons behind this:

Pelosi, of course, trotted out a bunch of bullshit to pretend she’s not simply trying to deny Trump a platform to speak:

In her letter to the president, Pelosi cited security concerns and the need for proper protection at events such as the State of the Union to ensure the “continuation of government.”

But senior Homeland Security officials fired back, saying that despite the fact that their personnel have not been paid, they have been preparing for months for the State of the Union event.

“We are ready,” one official told Fox News Wednesday. “Despite the fact members of the Secret Service are not being paid, the protective mission has not changed.”

Security will be just fine. Capitol Hill is right down the street from the White House; it’s not far at all.

I was listening to Dan Bongino’s podcast yesterday (highly recommended by the way, he’s the man) and Bongino, who is ex-Secret Service, said there is not one iota of truth to Pelosi’s claims. The Secret Service is more than capable of handling security for the State of the Union, with or without a government shutdown.

After all, Trump has been just fine the past 27 days despite the shutdown.

Rand Paul, however, has a suggestion: just hold the SOTU in the Senate chamber if Pelosi won’t allow it in the House chamber.

Senator McConnell is in charge of the Senate. If Mrs. Pelosi refuses to allow the president to deliver the State of the Union in the House, I propose we move it to the Senate and make it happen!

If, as Pelosi says, the date of the SOTU is “not sacred,” then neither is the venue, no?

The Senate chamber is smaller than the House chamber (100 Senators vs. 435 Representatives) but it would look largely the same to a television audience. Trump certainly has this option on the table.

But because we have a fighter in the White House, President Trump didn’t just try to make do with the hand Pelsoi dealt him.

He went on the offensive: using Pelsoi’s own logic that with the government shut down it’s far too dangerous for high-ranking government officials to travel, Trump sent the following letter:

Due to the Shutdown, I am sorry to inform you that your trip to Brussels, Egypt and Afghanistan has been postponed. We will reschedule this seven-day excursion when the Shutdown is over. In light of the 800,000 great American workers not receiving pay, I am sure you would agree that postponing this public relations event is totally appropriate. I also feel that, during this period, it would be better if you were in Washington negotiating with me and joining the Strong Border Security movement to end the Shutdown. Obviously, if you would like to make your journey by flying commercial, that would certainly be your prerogative.”

Isn’t it awesome to finally have a Republican who’s not a whimpering pussy?

Rush was loving it:

I can’t wait for all the Principled Conservatives to erupt in anger at Trump’s move while mostly ignoring Pelosi’s.

Never forget that the only actual “principle” they have is a visceral, personal hatred of the President. That’s it.

Speaking of which, Ben Shapiro, predictably opposes Trump’s move, because why actually fight back when #Facts and #Logic will suffice?

I don't get the logic of Trump denying Pelosi her trip. Why not just point out that her trip will require massive logistical support — and that she'll get it — and that she's obviously lying about SOTU?

Because pointing out that leftists are lying totally works!

Hey Ben, why don’t you challenge her to a debate? That always works. You always bring home massive W’s when you challenge people to debates on Twitter.”

This is why, ultimately, Ben Shapiro is not on our side.

“I can’t wait to hear the wailing from the cucks. The screeching that by treating Nancy Pelosi to the exact same level of contempt she’s shown to him he has “violated sacred norms” that require “men” to behave like sissies.”

Hey, Fake Jake: suck one. You are the Enemy of the People.

As I was saying the other day, Trump’s instincts are almost always correct, and his instincts are spot-on here: shove it right back in the Democrats’ faces.

Keep the pressure on them: don’t stop until we get a wall.

1 comment on “Nancy Pelosi Tries to Delay the State of the Union Address to Silence Trump; Trump Responds by Canceling Pelosi’s Overseas Trip”