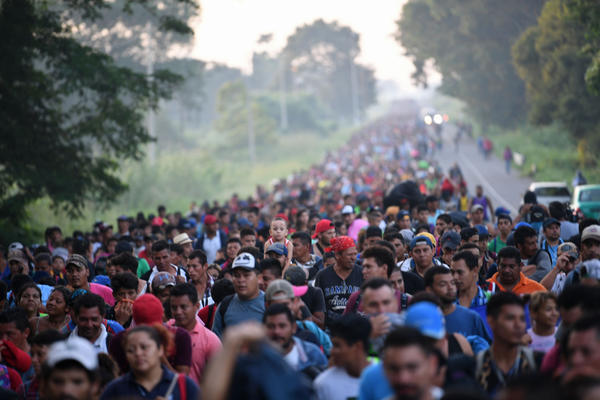 This is how it goes. First, the right accuses the left of wanting some policy goal (say, gun confiscation and repealing the Second Amendment) which the left pretty obvious wants. The left, however, knowing that said policy goal is wildly unpopular with the American people, vehemently denies they want the policy.

However, before long, the left will inevitably come out in favor of the policy goal they previously spent a good deal of energy denying they wanted.

Leftists in 2018: “Repeal the Second Amendment, and we’re coming for your guns”

This guy is definitely gonna wrestle your guns away from you:

Or maybe that’s a girl. I genuinely can’t tell.

At any rate, today, “We are coming for your guns” is the mainstream consensus position of the Democratic Party, even though several years back they vigorously denied it and claimed they supported and respected the Second Amendment.

When did they change their minds? Never: they’ve always wanted to confiscate all the guns and repeal the Second Amendment. The only difference now is that they feel safe showing their true colors.

It was the same thing with gay marriage: prominent Democrats insisted right up until the 2012 election that they opposed gay marriage and believed marriage was between a man and a woman. Then they all publicly came out in favor of gay marriage. They were always privately in favor it, and we on the right knew it all along, but by 2012 they felt as if it was politically safe for them to come out and admit it.

Socialism is another thing Democrats have always pretended to be against while privately being in favor. Then the proud and open socialist Bernie Sanders ran for President in 2016 and was quite popular, proving once and for all that, yes, Democrats are socialists. The party’s new face is Congresspersyn Alexandria Ocasio-Cortez, who is proud to be a “democratic socialist”. Democrats are socialists. They’ve always been socialists, of course, but now they’re comfortable with admitting it.

And the Uniparty “media” claims we’re the ones who have taken an extreme turn.

The latest issue the Democrats are about to stop pretending to oppose is open borders. Someone named Farhad Manjoo wrote an opinion piece for the New York Times entitled, “There’s Nothing Wrong With Open Borders.” Remember the day January 16, 2019, because that’s the moment the Democratic Party took the first step toward formally and publicly supporting open borders (“formally and publicly” being the key words, because they’ve always been for open borders privately):

“The internet expands the bounds of acceptable discourse, so ideas considered out of bounds not long ago now rocket toward widespread acceptability. See: cannabis legalization, government-run health care, white nationalism and, of course, the flat-earthers.

Yet there’s one political shore that remains stubbornly beyond the horizon. It’s an idea almost nobody in mainstream politics will address, other than to hurl the label as a bloody cudgel.

I’m talking about opening up America’s borders to everyone who wants to move here.

Imagine not just opposing President Trump’s wall but also opposing the nation’s cruel and expensive immigration and border-security apparatus in its entirety. Imagine radically shifting our stance toward outsiders from one of suspicion to one of warm embrace. Imagine that if you passed a minimal background check, you’d be free to live, work, pay taxes and die in the United States. Imagine moving from Nigeria to Nebraska as freely as one might move from Massachusetts to Maine.

When you see the immigration system up close, you’re confronted with its bottomless unfairness. The system assumes that people born outside our borders are less deserving of basic rights than those inside. My native-born American friends did not seem to me to warrant any more dignity than my South African ones; according to this nation’s founding documents, we were all created equal. Yet by mere accident of geography, some were given freedom, and others were denied it.”

Fantastic reasoning: it’s “unfair” that most of the world was not born in America, the greatest country on earth. So let’s just let everyone in the world move to America!

I mean, it’s someone writing an op-ed in the Times.

Come on. Stop denying what we all know to be true. I know Guy Benson and the rest of the Fake Republicans dream of one day writing for the New York Times, but this is just ridiculous.

Manjoo’s op-ed was the NYT testing the waters to see what kind of response it would get. If the response was negative, they could say, “Hey, it’s just an op-ed. Doesn’t mean it’s the official position of this newspaper. That’s one guy’s opinion. We just published it.”

But we all know better. Nobody publishes an op-ed unless they more or less agree with it. Outlets only provide platforms to those views which they seek to promote. Only a fool would believe otherwise. I know the disclaimer at the bottom of every op-ed says “this does not necessarily reflect the views of the paper at large,” but we all know what’s going on. The NYT very seldom runs op-eds by people who go against Uniparty dogma.

Eventually the NYTimes editorial board will formally announce the paper’s support of open borders. We all know it’s coming.

More to the point, we all know the left has always wanted open borders.

What could be the next issue the left “evolves” on? Pedophilia. I’m serious. You don’t have to look very hard to find SJWs and freaks on Twitter trying to argue that there’s nothing wrong with pedophilia. And Twitter isn’t exactly doing much about it, either.

If you think it’s ridiculous that pedophilia could one day in the future (10-15 years down the road) come to be openly embraced by the left, consider that in 1985 it was also pretty inconceivable to think that the Democrats would in just under 30 years make support for gay marriage their party’s official stance.

Summed up, the process for Democratic “evolution” on issues is as follows:

What will follow? It’s anyone’s guess. There are a number of contenders, including polygamy and pedophilia.

There’s also free healthcare and welfare for illegals (already happening in California and New York City), as well as voting rights for illegals, but I would say open borders automatically includes healthcare, welfare and voting for foreigners, no?

Another contender would be the War on Traditional Masculinity, but the American Psychological Association has already formalized the left’s opposition to that.

Perhaps they’ll come out in open support of white genocide next? “War on White People? Pfft. That’s absurd. White people have the most privilege!” Eventually, “Actually, the War on White People is Good and anyone who opposes it is Evil.”

The bottom line is that anything you suspect leftists truly want, they probably do, no matter how much they deny it.

Also, I keep seeing all this talk about how we need millions of foreign immigrants (presumably low-skilled ones) to combat our “population crisis” and ensure that we remain a nation with a steadily increasing population. From the Manjoo piece:

“Economically and strategically, open borders isn’t just a good plan — it’s the only chance we’ve got. America is an aging nation with a stagnant population. We have ample land to house lots more people, but we are increasingly short of workers. And on the global stage, we face two colossi — India and China — which, with their billions, are projected to outstrip American economic hegemony within two decades.”

Don’t get me wrong, to a large extent, GDP does tell you a good deal about the state of a given nation, but you can’t boil everything down to GDP.

We have a depraved culture of sex and hedonism, a crisis of masculinity, an opioid epidemic ravaging our communities, a spiritual and emotional void caused by superficial consumerism and obsession with entertainment, eroding family values and families themselves, and we are balkanizing into self-segregation along ethnic and racial lines.

And our elites think all we need is more immigrants to boost GDP.

On a related note, Britain apparently never got the memo that immigrants boost GDP. Britain’s GDP per capita (the measure that matters the most) declined by almost 20% in just four years primarily due to increased migration:

Declining U.K. GDP per capita? I don’t know what could be causing that, but here are a few unrelated figures…

Anyway, I’m sure Britain will be back on the upswing any day now. https://t.co/QvvwnBvUW7