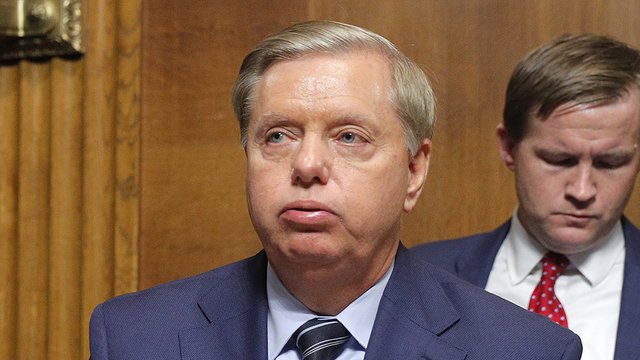 The Uniparty “media” cannot conceive of any decent person willfully supporting President Donald Trump (and, by definition, opposing the Uniparty), so they ascribe Trump support to us either being evil, racist, unbelievably stupid, or all three (usually it’s all three).

Writing off our Trump support as a product of evil and/or stupidity is how Uniparty elites comfort themselves and avoid the rather obvious truths that they are massively unpopular, their globalist ideology has failed horribly over the past few decades, and that the party is basically over for them as their chickens come home to roost.

In order to explain to themselves why Lindsey Graham has recently become one of Trump’s loudest and most prominent supporters, they’ve concocted this story that Trump is blackmailing Graham over Graham’s supposed closet homosexuality.

Holy, fuck fuck. I just the video of trumps bipartisan “meeting” yesterday. Hey, @LindseyGrahamSC what kind of dick sucking video do they have on you for you 2 be acting like this? Wouldn’t coming out be more honorable?

It’s not just the blown-out whore Chelsea Handler saying this, either. Newly-elected Democrat Rep. Ilhan Omar (you know, the other “YAAAS QUEEN! THE FUTURE IS FEMALE AND MUSLIM! HIJABS ARE LIBERATING!” Congresswoman) pushed this rumor on CNN yesterday:

They got to him, he is compromised! https://t.co/m8sB3EmElg

Rep. Omar on her homophobic innuendo that Graham is being blackmailed:

Omar: He is somehow compromised

CNN: Based on what evidence?

Omar: The evidence present to us

Omar: An opinion based on what I believe to be visible to me. Americans agree on this pic.twitter.com/wLL8dZUlkH

It was too much for even CNN. Of course, they didn’t scold her for being homophobic, like they certainly would’ve if a Republican was floating gay rumors about a prominent Democrat; they merely asked her to provide some evidence to back up her claim, which she could not do, obviously.

Here’s my question about Trump supposedly blackmailing Lindsey Graham: why now? There have been rumors about Graham being gay for years. He’s in his 60s and has never married. He’s been in the Senate for over a decade. The idea that Graham is secretly gay is nothing new. He probably is.

You think Trump has only now become aware of the “Graham is gay” rumors? Trump is the king of rumors. He’s good friends with the editor of the National Enquirer. He knew disgraced former New York Attorney General Eric Schneiderman was a perverted scumbag years before any of the #MeToo stories dropped about him. I don’t buy for a second that Trump only recently became aware of the Graham rumors. He’s probably known about them for years.

And if Graham is being blackmailed by Trump, why does Graham occasionally side against the President? He did yesterday over the matter of Trump canceling Nancy Pelosi’s overseas trip:

President Trump denying Speaker Pelosi military travel to visit our troops in Afghanistan, our allies in Egypt and NATO is also inappropriate.

I bet this is all part of Trump’s sinister plan to not make the blackmailing too obvious.

Trump probably contacted Graham yesterday afternoon and said, “Hey, Liberace, they’re on to us; tweet out something negative about me to throw them off.”

I’m sure this happened.

Why can’t the left make up its mind about Trump? Is he literally retarded and possibly completely out of his mind, or is he an Evil Genius, as they’re suggesting with this blackmail conspiracy? Which is it? Is Trump dumber than a four year old child, or is he a scheming, megalomaniacal super genius?

The Colbert Late Show tried to be funny asserting the former:

We got our hands on Trump's handwritten State of the Union address. #LSSC pic.twitter.com/1kSnACHTLp

Is Trump a three year old who writes with crayon, or is he a ruthless, Machiavellian schemer blackmailing Lindsey Graham? It can’t be both.

Also worth pointing out for the umpteenth time: the left cannot meme. This just isn’t funny. People who are full of raging hatred have no room for humor.

1 comment on “Tolerant and Progressive Leftists, Who NEVER Delve into Conspiracy Theorism, Convinced Trump is Blackmailing Lindsey Graham for Being Secretly Gay”