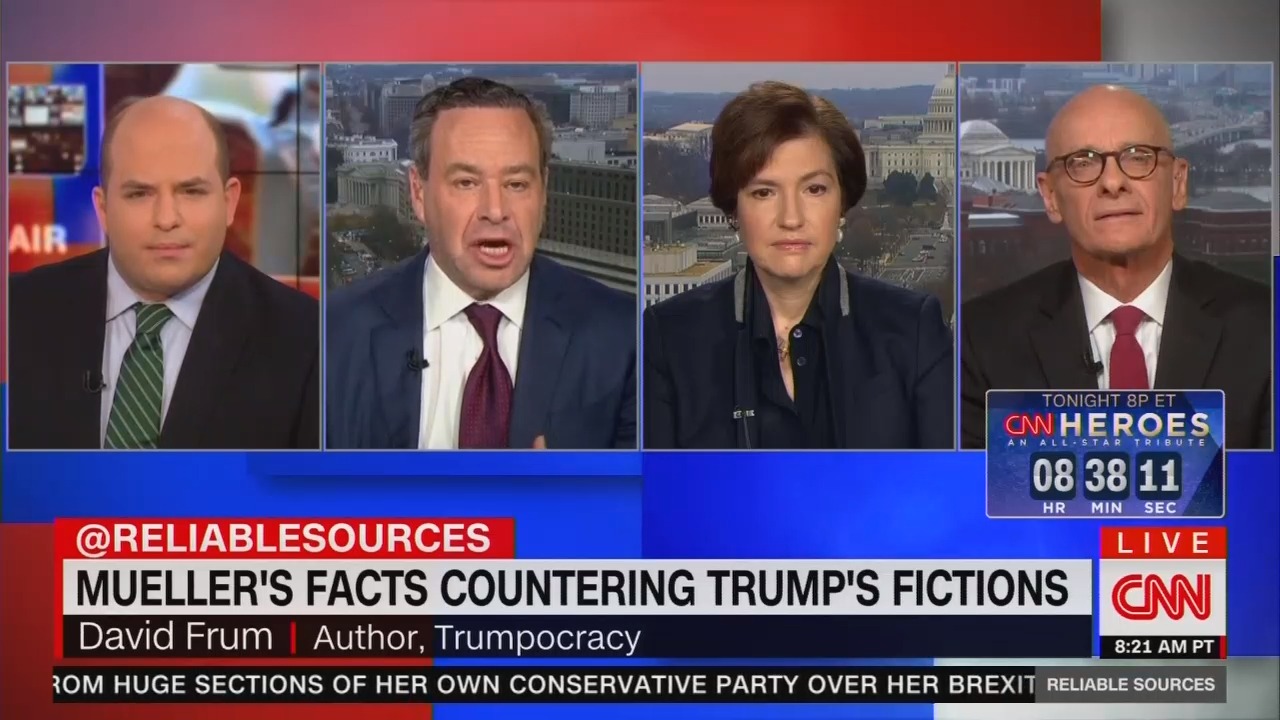 This was how it began Thursday night:

Trump supported a plan to visit Russia during the presidential campaign in order to personally meet President Vladimir Putin and jumpstart the tower negotiations.

I knew when I saw the headline that the story would likely fall apart in short order, and I tweeted as much at the time:

There’s no chance this is true. https://t.co/DvrqnygsLG

I left it at that because I wanted to wait for the story to unfold (i.e. unravel) before spending time and energy discussing a matter that was probably totally false. Entertaining false allegations only gives them more credibility.

Though the story was suspect from the beginning, this may come as a surprise but cable news immediately ran with it under the presumption that it was true, and began calling for impeachment proceedings, although I’m not sure “began” is the correct word because that would imply there was a prior point in time where they weren’t calling for impeachment.

According to Daily Caller’s Amber Athey, who had the unfortunate job of watching CNN and MSNBC all day, the two networks collectively used the word “impeach” 179 times on Friday as they obsessively discussed the BuzzFeed story.

Before we go any further, let me just say: The only way you could believe the BuzzFeed story is if you were already convinced President Trump is a criminal.

When did so many people become convinced that Donald Trump is a career criminal? The man was a prominent American public figure and celebrity for decades prior to running for president, and to my knowledge he was never considered an unscrupulous criminal, or a racist, until he ran for President.

The only reason you’d believe Trump is a career criminal is because you were brainwashed by all the past Fake Bombshell Headlines. Now do you see why the “media” runs these stories even though they fall apart within 48 hours? Far fewer people see the reluctant correction than the initial false headline. Fake News brainwashing works. I wrote about this on the old Medium site that the media primes or “softens up” the public to be more likely to believe the next anti-Trump “bombshell.” If you already think Trump is a criminal, you’ll have no problem believing the next “bombshell” report that supposedly offers new evidence that he is.

Anyway–right off the bat, there were a number of questions about BuzzFeed’s story that cast doubt about its veracity:

Personally, I can’t see Trump instructing Cohen to lie to Congress. I just can’t. This was why I was instinctively skeptical of the headline when I first saw it. The whole premise simply was not believable to me. I couldn’t picture it happening. It did not jibe with my understanding of Donald Trump. This, of course, is an entirely personal opinion based on no more than a gut feeling, but I’m sure many of you feel the same way and thus were also instinctively skeptical of the BuzzFeed story.

The next morning, legitimate reporters who actually care about facts and truth were already raising questions about the core claims of the story:

Issues w/ story:
1) No documentary evidence for supposed directive is provided
2) BuzzFeed sources are all 100% anonymous
3) Michael Cohen is a serial liar
4) It is not illegal to do business in Russia
5) Moscow Trump Tower project never got off the groundhttps://t.co/ABh63SMUbJ

Then, yesterday around 4:30pm, in a surprising move, Special Counsel Robert Mueller’s office stepped in and debunked the story:

I certainly was not expecting Mueller to come out and douse this story with cold water, but John Nolte has an explanation:

“The sphinx himself fact-checked [the media’s] lying asses.

The last thing Robert Mueller needs are unexpected expectations around the report he will someday release about the Russia collusion hoax, so he and his team of Democrat lawyers must have watched in abject horror as the media way-way-way over-promised on what would deliver — which is a slam-dunk impeachment case.

Make no mistake, Mueller is a dirty cop out to see Trump impeached. But he can’t overturn the 2016 election. He can’t meet that goal if his report is so over-hyped it lands with a thud.”

The cable “news” networks were jizzing themselves over the BuzzFeed “story” all day Friday. It was so bad that Mueller had to step in and shoot the story down out of his desire to manage expectations.

Of course, it wasn’t just the Lyin’ Brian Stelters and Fake Jake Tappers and Chuck the Cuck Todds of the world that pushed the BuzzFeed story as if it were true.

You’ll be surprised to learn that your favorite True Conservatives™ and cucks could barely contain their glee at being afforded another opportunity to pooh-pooh President Trump’s moral character:

If this story is correct, it’s both inexcusable behavior and a full-scale disaster for Trump https://t.co/NKsPyRICkz

There’s our greatest champion, Ben Shapiro, instantly giving the BuzzFeed “story” the benefit of the doubt simply because all the Cool Liberal Blue Checkmarks were treating it as if it were rock solid. Ben is our LeBron James, our Captain America. We can always count on him to Destroy The Libs and fight for what’s right!

Of course Ben retweeted a couple of his Tru Con™ Sisters:

These guys evidently never learned in grade school that when you copy your buddy’s homework, you have to change it up a little bit to make it less obvious to the teacher.

The True Conservatives™ should try making it less obvious that they’re pushing the exact same talking points as the Uniparty Propaganda Department.

It’s awfully curious that the “media’s” “mistakes” always, without fail, go in one direction: against President Trump. 🤔🤔🤔

That’s how you know the American “news media” isn’t really a “news media” at all, but instead the Uniparty’s Propaganda & Character Assassination Department. An honest, truth-seeking press would (occasionally) make mistakes that paint both political parties in a bad light, but our “media’s” “mistakes” only go one way.

This is how you know stories like BuzzFeed’s are not actually “mistakes” but rather desperate attempts to create false narratives in the general public and eventually engineer an unjust impeachment.

Now the “media” is playing the “innocent mistake” card as if Buzzfeed actually prioritized telling the truth over painting Trump in a negative light.

If they were mistakes, they were easily avoidable mistakes that anyone with a shred of honesty and integrity wouldn’t have made.

That’s how you know they weren’t mistakes.

Whenever a supposed “bombshell” about Trump drops, and the media is claiming it’s “different this time” and that Trump is cooked, simply rewatch this video:

When any story like the Buzzfeed one comes out, remember this video. pic.twitter.com/GgSiwzbG89