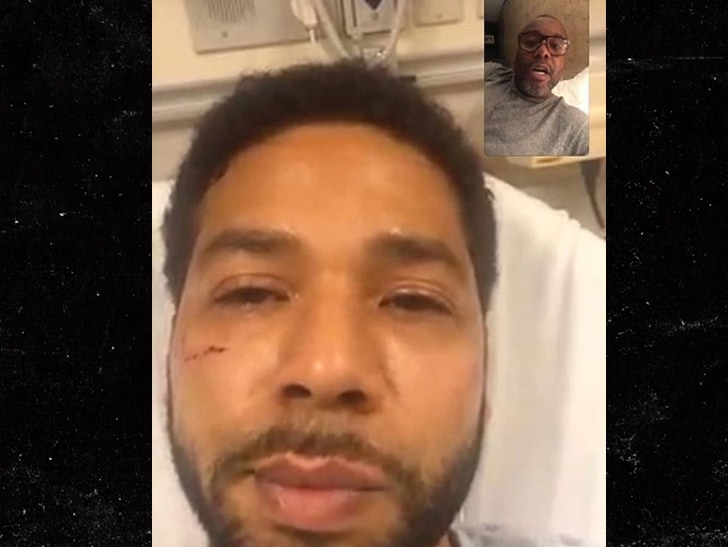 The moment I saw this headline I knew it was fake, like virtually every supposed “hate crime” against minorities reported credulously by the media since President Trump’s inauguration:

I had no idea who Jussie Smollett was prior to reading this, but now I know one thing about him: he’s a total liar.

“Empire” star Jussie Smollett was brutally attacked by 2 men who beat him up, put his head in a noose and screamed, “This is MAGA country.”

Sources directly connected to Jussie tell TMZ, the actor arrived in Chicago from New York late Monday, and at around 2 AM he was hungry and went to a Subway. We’re told when shortly after he walked out on his way home, someone yelled, “Aren’t you that f***ot ‘Empire’ n*****?”

The 2 men — both white and wearing ski masks — viciously attacked Jussie as he fought back, but they beat him badly and fractured a rib. They put a rope around his neck, poured bleach on him and as they left they yelled, “This is MAGA country.”

Are you kidding me?

No one in Chicago, not even the most die-hard Trump supporter (there are more of us than you think) would ever declare this city “MAGA country.”

Right off the bat, this story is not believable.

“ThatGrapeJuice.Net first posted this letter which was sent to Fox Studios in Chicago with cut out letters spelling, “You will die black f**.” Our sources say the letter was sent 8 days ago.

The envelope the letter arrived in appears to say MAGA in the upper left corner.”

It looks like it was written and drawn by a five year old.

But then again, that would fit with the left’s perception of Trump supporters as being literally retarded.

And why would they write “MAGA” on the envelope? Would the sender really want Trump to get blamed for this?

This is so pathetic.

And of course, Chicago police are already shooting down the claim that the attackers said “This is MAGA country!”

Chicago police deny claims that Jussie Smollett identified attackers as white or heard them reference "MAGA" country. "According to the victim, the offenders’ faces were concealed," police tell @robbysoave https://t.co/aqOAYlXOpK

Ace of Spades finds more holes in the story:

“Baron Von Munchausen asks a good question: Who walks around at 2am in 15 degree weather with a bottle of bleach on the off-chance one might run across someone of a minority race or sexual orientation? This just does not seem like a random racial/homophobic attack, which means that’s probably not actually the motive.

Assuming the threatening letter is connected to this attack, it suggests a more personalized motive, and long-building grudge. It just doesn’t seem likely that celebrity stalkers would find their quarry out on the street — they’d encounter them where they would plausibly know they were to be found, like at home, or at work, or at some event the media announced in advanced they’d be attending.

The facts as they are currently being claimed suggest both a random, opportunistic attack and a planned attack against a specific person for a specific reason. Obviously, these cannot both be true. There’s something wrong here.”

Now from what I understand the attack happened near a Target store, so I guess that could explain where the attackers got the bleach from.

But I also don’t know of any Target stores in this city that are open at 2am.

This “attack” happened outside. So the “attackers” just happened to be carrying around bleach and a noose.

This will shock you but Jussie Smollett is a hardcore Trump hater, so he definitely has no motive to fake this:

So far, Chicago PD has not been able to find any video of the attackers:

Not only this, but they have no video of the attack itself:

Chicago police say detectives have reviewed hundreds of hours of surveillance footage but haven’t found any yet that shows the alleged attack on “Empire” actor Jussie Smollett. https://t.co/zj2fs1MUyX

There are cameras all over the place in big cities. You can’t take five steps without being on closed-circuit TV.

The truth will come out eventually.

Yet how many people will believe this nonsense instinctively and never see the real story when it unravels? How many people will take this unfounded allegation as further confirmation that white people are awful, and that Trump is a RACIST who has declared open season on oppressed minorities?

How many NPCs are “LITERALLY SHAKING!” and “WOW, JUST WOW” over this?

The real hate crime is deliberately lying about white Trump supporters in order to demonize them as a group.

There is no such thing as “racially charged.”

This attack was not “possibly” homophobic. It was a racist and homophobic attack.

If you don’t like what is happening to our country, then work to change it. It is no one’s job to water down or sugar-coat the rise of hate crimes. https://t.co/QAi0IYtSeR

“What is happening to our country.” Get outta here.

I’ll tell you what’s happening to our country: You’re allowed to straight up lie about Trump supporters so long as the lie fits with the anti-Trump racial grievance narrative the left so desperately wants to be true.

In the days of Jim Crow, white people used to falsely accuse black people of crimes because the white people knew they’d be believed over the black people. The attitude was, “Well, he’s black, so of course he’s guilty.” We’ve all read “To Kill a Mockingbird.”

Today, the exact opposite is true: any accusation leveled by a black person at a white Trump supporter is automatically believed.

The US “media” wasn’t inherently skeptical of this baseless allegation. It immediately ran with it under the presumption that it was true, because as everyone knows, black people are Super Oppressed, and everyone also knows Trump supporters are violent bigots who do exactly this kind of thing all the time. It’s gotta be true!

This is brainwashing, straight up.

So what’s the real story? We don’t know yet, but this is a good guess:

Assault may be true. It also sounds like a story a person would make up who got beat up for some activity they didn’t want to talk about. Not saying that’s what happened but the description of assailants is a little cartoonish. Oceans of cameras there will tell story.