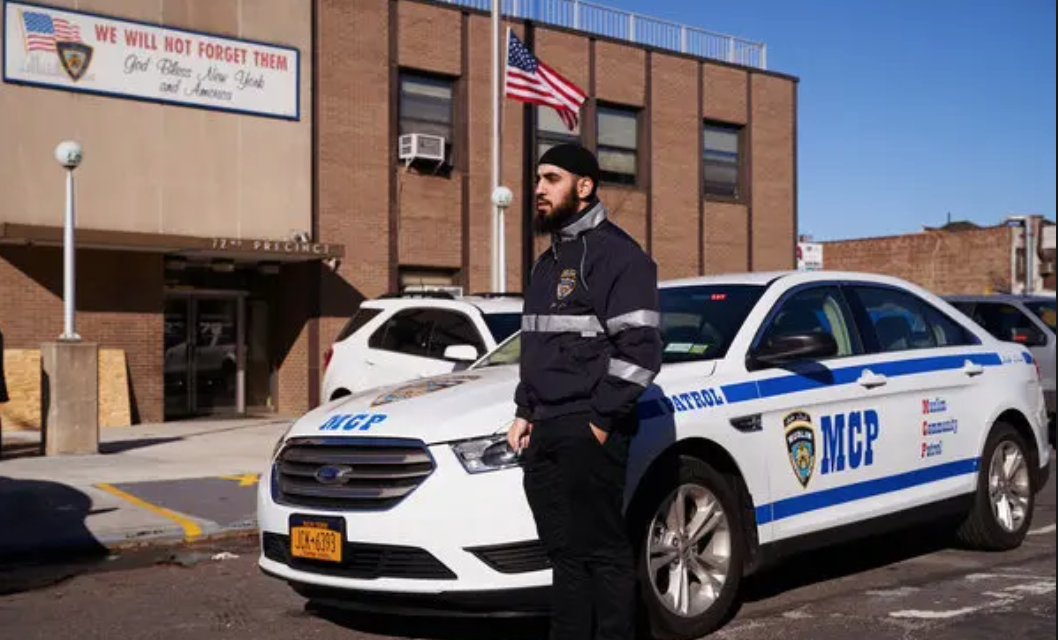 The streets of New York City are about to be Enriched™ by Muslim Community Patrols. Isn’t this wonderful?

Now, white millennial liberal women in New York don’t have to travel abroad to experience other cultures–other cultures are coming to them!

“[Maeen Ali] will spend most of his time sitting in a white Ford Taurus that is detailed to look like a police squad car with red and white emergency lights.

Mr Ali is among the first 30 members of the all-volunteer Muslim Community Patrol & Services that is preparing to operate in neighbourhoods in Brooklyn, with a goal of growing its fleet of two cars to five by the end of the month and eventually expanding citywide. The group recently held a training led by off-duty officers from the police department’s 72nd precinct.

“It’s like a neighbourhood watch but on steroids,” said Noor Rabah, the group’s 31-year-old vice president who lives in Sunset Park.”

Now, they claim these Muslim Patrols are to protect Muslims from hate crimes, which are supposedly skyrocketing in Trump’s America™, but the only hate crimes on the rise are fake hate crimes carried out with the goal of smearing Trump and his voters.

“Maeen Ali remembers the worry he felt when he first spotted the “Punish a Muslim Day” screed online.

The letter, mailed last spring throughout England, encouraged violence that ranged from pulling off a woman’s head scarf to bombing mosques. Each attack, the letter instructed, would be rewarded with points. The hate campaign prompted the police in New York and other big cities to expand patrols around mosques and Islamic centres on the specified day.

Mr Ali, who lives in downtown Brooklyn, said he was consumed by thoughts of his four children’s safety.

“That just boiled inside of me,” said Mr Ali, who moved to the United States from Yemen in 1990. “That’s when I said to myself that it was really important to come out and protect Muslims in the community.”

No word on whether “Punish A Muslim Day” actually resulted in any Muslims being punished. More than likely it was a set-up, like every other anti-minority hate crime in the West these days.

Regardless, this always-around-the-corner pervasive Muslim hatred is all the proof we need: Muslims are under attack from Evil Whites and need to take matters into their own hands.

The real reason for these Muslim Community Patrols is to enforce Sharia. Muslims in London are already doing it.

Sharia Law: coming to a trendy Brooklyn neighborhood near you!

Thot Patrols are going from meme to reality. A beta test is already up and running in New York City. These patrols grant the wish of liberal white women to live in vibrant multicultural zones. They will love being told what to wear and how to behave by non-white men. pic.twitter.com/RqBpmcLQjG

Diversity is Our Strength!™

Don’t forget, Trump is the one oppressing you!

2 comments on “Liberal White Women in NYC: Get Ready for DIVERSITY!”