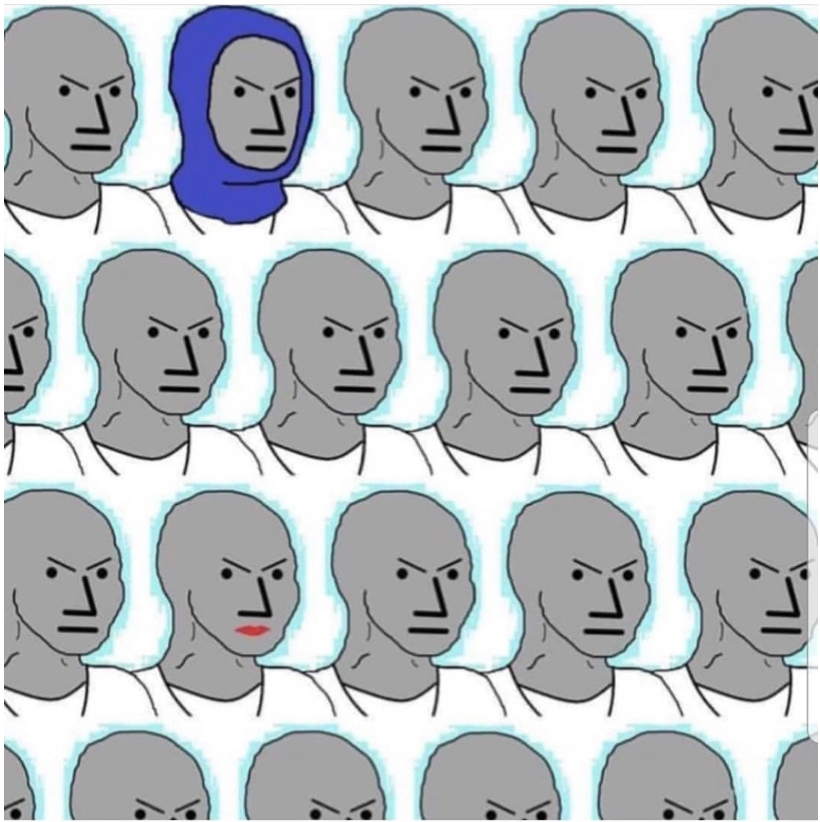 When your entire political movement is based on treating gender and skin color as virtues in and of themselves, you will unavoidably get images like these Congressbroads cheering for themselves simply because they’re women–as if being a woman itself is something to be proud of, an achievement deserving recognition.

Observe Alexandra Ocasio-Cortez and her Pussyhat Caucus during the State of the Union. These hags sat around for two hours scowling with their arms folded while Trump talked about arresting human traffickers, putting drug cartels out of business and creating jobs for women and minorities, and the only time they actually stood and applauded was when Trump gave them a shout out for being elected to Congress despite being Super Oppressed as Women:

Look at us in our white outfits! We stand out! LOOK AT US! WE HAVE VAGINAS!

Their whole mantra is ORANGE MAN BAD, ORANGE MAN = PATRIARCHY, ORANGE MAN OPPRESS US so they sat stone-faced and angry as Trump recognized war heroes, astronauts and children with cancer, yet they couldn’t resist standing and cheering for themselves when Trump pointed out they are the least oppressed generation of women in United States history.

The underlying assumption, of course, is that Women Are #Oppressed and that they beat the odds in getting elected to Congress in our horrible, cruel Patriarchal society.

Forget the war heroes, cancer survivors and astronauts: these women are the real heroes.

Get the fuck outta here.

The very fact that this new Congress has the most women ever is proof that women in America have never been less oppressed.

And yet these clueless women really do believe they’ve Beaten The Odds. They may not know what the hell they’re talking about, but they’ve sure got a lot of strong opinions and #feelingz and they’re gonna make sure everyone hears them.

A universal rule of thumb in today’s America is that any group that is widely viewed to be #Oppressed is in fact the exact opposite of #Oppressed. In fact, that group is probably the one doing the oppressing.

Single mothers are glorified as #Strong and #Heroic in popular culture, but does anybody say a word about single fathers?

Where is all the Body Positivity for men? Where are the male plus-sized models? Why aren’t we told that overweight men with receding hairlines are BEAUTIFUL and STRONG? It’s only ugly women who we have to pretend are attractive.

Men in movies, television shows and commercials are generally portrayed as dumb oafs, brutes, criminals and dangerous overall. I just finally watched Mad Max: Fury Road (I know, it’s been out for a while) and while it was a pretty good movie, it ultimately boiled down to a simple narrative of “MEN BAD, WOMEN GOOD.” All the bad gangs were men, and the one good gang roaming the wasteland was all-female.

Gavin McInnes put together a nice compilation of commercials where the women are empowered and strong and the men are hapless, useless morons:

The examples are endless. This video (made by a woman, no less) is excellent:

I got more where that came from:

It’s almost as if men’s #feelingz don’t matter at all.

Who is automatically believed in sexual assault/misconduct allegations? The man, or the woman? The woman. When the legal justice system inherently gives you the benefit of the doubt, and is even willing to convict men based on false accusations made by you, this is the polar opposite of being oppressed. We’re just a few months removed from the pussyhats nearly stopping a Supreme Court nomination due to completely fabricated charges of sexual assault.

Men work almost all the dirty and dangerous jobs and are 10x more likely to be killed at work than women. You don’t ever hear anyone shrieking about closing the workplace death gap, do you?

And about that mythical “gender pay gap”: if you think about it for more than a second, it’s obviously nonsense. If women really did get paid 20% less (or whatever the exact number is) for the same work as men, then the gender pay gap would disappear almost immediately. My basement just flooded and we’re in the process of demo and rebuild–it’s an expensive affair. If you told me a team of women could do the same exact job for a price 20% lower than we’re paying, I would hire them immediately without a second thought. Please, point me in the direction of these cheap female laborers.

The “gender pay gap” is so absurd even the Bezos Washington Post’s resident “fact checker” debunked it.

Furthermore, women outnumber men 56% to 44% in college enrollment, and the number is only going higher. We know people with college degrees make more money, so this only further dismantles the myth of the “gender pay gap.”

Men are more than twice as likely to die of an opioid drug overdose.

Men are routinely screwed over royally in divorce court because the presumption is always that the man is the scumbag and the woman is the #Victim.

What more do these women want?

Enough with this nonsense. You’re not #Oppressed. In fact, you’re the very opposite of oppressed.

If anything, it’s men who regularly get the short end of the stick in America 2019.