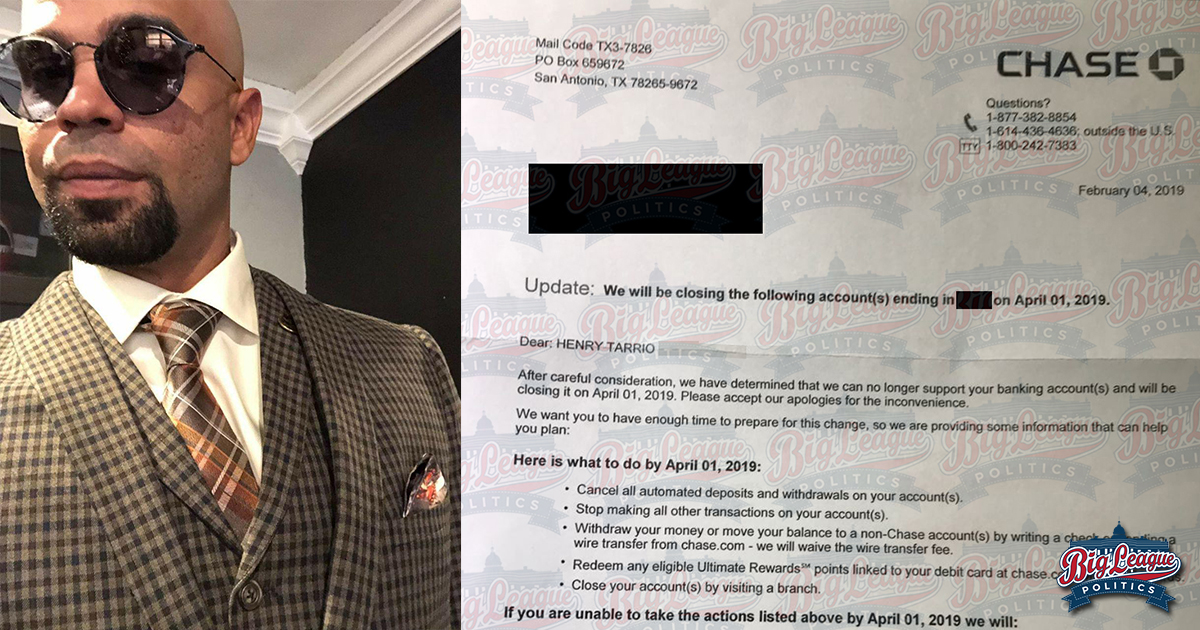 “Enrique Tarrio, who is the Chairman of the Proud Boys fraternal organization, had his personal Chase bank account shut down abruptly earlier this week.

In a letter obtained exclusively by Big League Politics, the bank informs him that he must shut down all of his accounts by April 1st, 2019, without giving a reason.

This comes just days after Chase Bank’s payment processor, Chase Paymentech, de-platformed him on a website he runs that allows groups and charities to sell merchandise, and raise money for causes. The website, 1776.shop, is most known for selling the famous “Roger Stone Did Nothing Wrong” shirts which Stone was spotted in during the late-night arrest at his home.

Tarrio has been facing months of backlash for his affiliation with the Proud Boys, first getting onto the radar in an article published on The Daily Beast, which asserts that people of color are joining white supremacist organizations. Tarrio is both Cuban, and black, and was profiled in that article.

The Proud Boys, despite simply being a fraternal organization that believes in Western culture, have been smeared as a hate group. Gavin McInnes, the group’s founder, is currently suing the SPLC over their hate group label.”

“My political views pretty much mirror those of President Donald Trump,” Tarrio says. “But the media, and groups like the Southern Poverty Law Center, smear me trying to tie me, an Afro-Cuban, to ideologies that would force me out of my own country if they went into effect. It’s completely asinine and based completely outside of reality.”

Now that he has lost his bank account, his own life will become much more difficult, as Tarrio explains.

“How am I supposed to get food to feed my family? Are they taking the directions of the Governor of Virginia and trying to abort me 34 years after birth?” Tarrio questions. “They are essentially denying my existence, and trying to force me into homelessness, and ultimately death.”

Tarrio believes that unless President Donald Trump steps in, the de-platforming and dehumanizing of conservatives will continue.

“He needs to step in, not only because if he doesn’t he will lose in 2020 with all of his supporters being kicked off social media, but because it’s the right thing to do,” Tarrio finishes.

The message is clear: being a Republican ain’t worth it. Better shape up and reeducate yourself or else life is going to get a lot harder.

Trump needs to do more than just tweet about this type of thing when it happens.

Martina Markota, a conservative political pundit, also had her Chase bank account shut down without explanation:

I didn’t want to assume my chase business account closed over politics. But things are getting crazier and crazier, and I’m starting to think maybe it WAS over politics

The disenfranchisement of political dissidents is only just beginning. It will continue to get worse over time.

1 comment on “Free Speech is Effectively Dead in America”