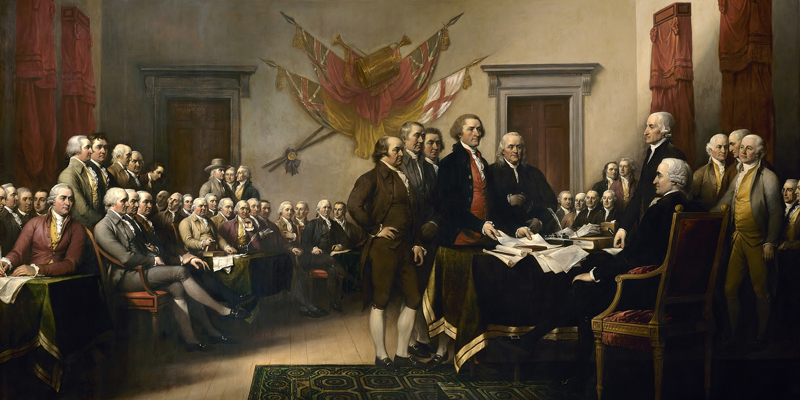 We hear it all the time. “You can’t favor reduced immigration (legal or illegal, the Uniparty elites don’t even distinguish between the two anymore) levels today because that’s not fair, America is a nation of immigrants; it always has been and always must be, so you can’t shut the door behind you. Your family came here as Immigrants one day in the past so all present and future immigration is Good.”

It’s a compelling argument, and one I fell for myself at one point.

But it’s total bullshit when you scrutinize it.

The first question to ask is, were the Founding Fathers immigrants?

Simply thinking about the matter rationally for more than a minute reveals the answer: of course not.

Just because the United States as an independent political entity did not exist until 1776 (technically, 1781, the end of the Revolutionary War, or even 1789, the year the Constitution was ratified and George Washington became the first President of the United States) does not mean America didn’t exist before then. Sure, the thirteen colonies were property of Britain prior to 1776 but that doesn’t mean we weren’t always our own unique nation. After all, we had a whole ocean separating us from Britain, and it took months to get even a letter across it back then. America developed and matriculated on its own, not under the close tutelage and supervision of Britain.

Think about it: Britain owned a multitude of different nations around the world, but those nations certainly had their own separate identities independent of Britain. Did India only begin existing in 1947? Of course not. India (and Pakistan, because Pakistan was a part of British India and only split apart into its own country after Britain relinquished India) only gained its independence from Britain in 1947. It didn’t become a place after gaining independence.

Of course, Britain is inextricably a part of our national identity. No one can deny this. But that doesn’t mean America WAS simply Britain until 1776. If that were the case then they did England itself not rebel against the British crown when we did? And why are we different today? The American colonies were their own nation, despite being owned and heavily influenced by Britain.

The fact is, America as we know it was settled over 150 years before the Declaration of Independence. The Pilgrims arrived in 1620 and the British settled Jamestown as early as 1607. And of course we trace the earliest settlements in America back to Christopher Columbus in 1492, which we recognize as essentially the year America was first discovered by our precursors. I understand the Indians were here way before 1492 but virtually none of us descend from them and therefore we claim 1492 as our moment of origin. The earliest European settlers in America did not “immigrate” to an established country owned by the Indians, they moved here and established their own settlement, and eventually a country, on the same land.

The Great Samuel P. Huntington explains in his book “Who We Are”:

“Immigrants are people who leave one country, one society, and move to another society. But there has to be a recipient society to which the immigrants move. In our case, the recipient society was created by the settlers who came here in the 17th and 18th centuries. … They came in groups to create new societies up and down the Atlantic seaboard. They weren’t immigrating to some existing society”

The first Americans were not immigrants. What country was there for them to immigrate to? What government did they have to petition for entry?

The answer is obvious: they didn’t arrive in any country. They founded their own country upon arriving here.

America existed way before 1776. The time between the Declaration of Independence and the settlement of Jamestown was a period of 169 years. Back to the Mayflower was 156 years. In today’s terms, 156 years prior to 2019 would be 1863, the year of the battle of Gettysburg during the Civil War. Think of how far back in time that feels. That’s how far back in time the Mayflower was to our Founding Fathers in 1776.

And as for the Founding Fathers themselves, how many were actually immigrants? It shouldn’t surprise you (though it will given the level of “NATION OF IMMIGRANTS!” indoctrination that has taken root in this country) to learn that only a tiny minority of our Founding Fathers were anything less than full-blooded Americans in 1776.

In her fantastic book “Adios America,” Ann Coulter notes that 48 of 56 of the original signers of the Declaration of Independence were American-born (pp. 52).

Let’s take a look at the major names from the Founding Generation:

George Washington was a third generation American. He never visited Europe in his entire life. The furthest he ever traveled from his home in Virginia was the Caribbean.

John Adams, our second President, was a fourth-generation American. His great grandfather moved from England to the Massachusetts Bay Colony (which would become Boston) back in 1638.

Thomas Jefferson was at least a third generation American. His great-grandfather was a member of the Virginia House of Burgesses in the 1650s.

James Madison, our fourth President and the architect of the Constitution, was a fourth generation American.

Benjamin Franklin’s father Josiah was British-born and moved to America in 1683 with his first wife, who died shortly after. Josiah remarried in 1689 and Benjamin was born in 1705. However, Ben Franklin’s mother Abiah Folger was born in Nantucket. Her family arrived in America in 1635.

Alexander Hamilton is the only one of the eight main Founding Fathers who was not American-born.

This country was not founded by immigrants. It was founded by Americans who simply wanted to gain autonomy and independence from the British empire.

Again: yes the American identity is inextricably tied up with British identity and our two nations share many common traits, but that doesn’t mean that we *were* British until 1776. Canada, too, has a ton in common with Britain but nobody says Canada *was* Britain until it gained its independence in 1867.

“Contrary to PC nonsense about America being a ‘diverse’ melting pot, America has never been a ‘nation of immigrants.’ Most Americans have always been born here. Even as late as 1990–a quarter century into Teddy Kennedy’s scheme to remake the nation–half of the American population traced its roots to the black and white populace of 1790. Nearly the entire white population of America from 1600-1970 came from a geographic area of the world about twice the size of Texas [Western Europe]. The entire black population came from an area of West Africa about the size of Florida.

This is all to say that anyone who tells you America is not a unique nation with clear and definable characteristics is lying to you. America is—well, was, thanks to the disastrous 1965 immigration reform—a predominantly white Anglo-Saxon protestant nation. That’s simply a fact. It’s not racist to say this, it’s simply the truth.

You can’t claim that America isn’t a white nation. You can’t say it wasn’t settled by white people. Those things are simply immutable and undeniable facts of history.

What about the second wave of European immigrants, the ones who came across the Atlantic to Ellis Island around the turn of the century? Don’t they prove that America is a “nation of immigrants”?

“The entire time it was processing immigrants from 1892 until 1954, Ellis Island only received 12 million immigrants. Please stop weeping about your grandfather arriving at Ellis Island. It’s irritating. And it bears absolutely no relationship to immigration today. Earlier immigrants proved their heartiness by vomiting all the way across the Atlantic Ocean to get here. There was no welfare, and certainly no welcoming committees of ethnic grievance groups.”

More the point, the “second wave” of European immigrants were genetically similar to those who comprised the first wave (i.e. the British and Dutch colonists). Below is a DNA map showing the dominant DNA haplogroups of Europe, the Middle East and North Africa:

The second wave of immigrants came from largely the same genetic stock as the first, the red R1b group.

Now, none of this changes the fact that a sizable contingent in this country that’s trying (and succeeding) to change America from a predominantly white Western European-descended nation to a ‘diverse’ one, but they do so by lying to you and telling you America isn’t an inherently white nation.

While I disagree with people who want to demographically remake this country, I would at least have a tiny bit of respect for them intellectually if they simply admitted what they’re trying to do. I can appreciate intellectual honesty.

But we have a political and cultural elite that is trying (and succeeding) to change our country into something it has not been traditionally or historically, and all the while is lying about what it’s doing. They will not admit they’re trying to change America from a white country into a nonwhite one; they will always lie and gaslight you and say America is a nation of immigrants or that we’ve always been multicultural, or more often they’ll just scream “RAAAAAACIST!!!!” at anyone who has the audacity to claim that America is and has always been a white country.

America is and has traditionally been a white country. It’s simply a fact.

Yet we’ve been raised and taught to purge this thought from our minds as if it were an unthinkable evil to even acknowledge.

If you would like to change that fact, then simply admit it: “I want to change America from a white country to a nonwhite one.”

Don’t try to obscure your intentions and pretend to be SO OUTRAGED and SO INFURIATED over anyone pointing out the glaringly obvious and undeniable fact that America is and has traditionally been a white country.

0 comments on “Is America a “Nation of Immigrants”?”