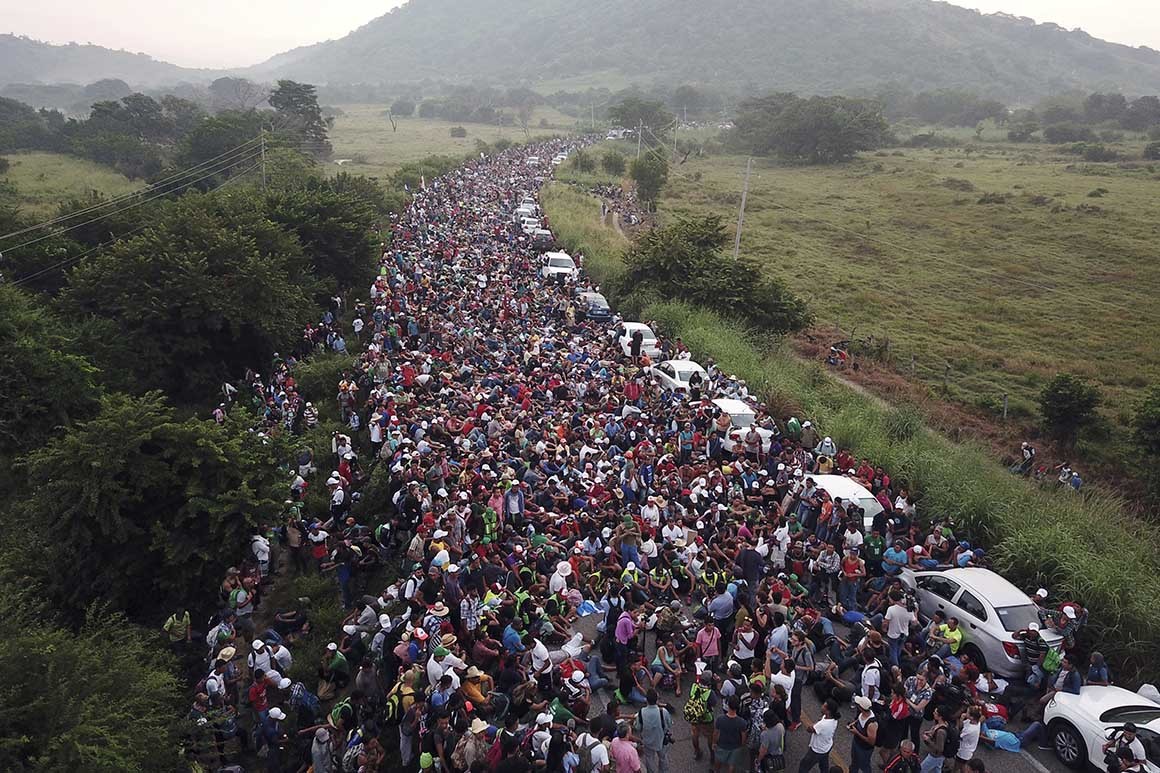 Look at the headlines on Drudge:

I’d say that qualifies as a national emergency. We are being invaded:

“Arrests of families crossing the U.S.-Mexico border illegally in the past five months hit a record, prompting the chief of Customs and Border Protection to say the system is at “the breaking point.”

From October through February, border agents arrested 136,150 people traveling in families at the southern border. Those figures exceeded the record for a full, 12-month period; 107,212 people were arrested during the federal fiscal year that ended in September.

Meaning in the past five months, more illegals were caught than in the worst 12-month period on record.

“More than 76,000 people were arrested in February, making it the busiest month since President Trump took office and the busiest February since 2008. Since 2013, when the U.S. Customs and Border Protection began counting family units, there have been 2.6 million total apprehensions along the U.S.-Mexico border.

The numbers were the sharpest evidence yet that, despite Mr. Trump’s efforts to crack down on illegal immigration, the flow of migrants is only growing.

“This situation is not sustainable,” Customs and Border Protection Commissioner Kevin McAleenan said while releasing the numbers Tuesday. “The system is well beyond capacity and remains at the breaking point.”

Illegal immigration begets more illegal immigration: when the people south of the border who want to come hear from those who have made it in how easy it was, it won’t be long before even more set off for America.

“If Trump had not signed the disastrous budget bill several weeks ago and we were still operating on a short-term CR with immigration remaining the top issue, today’s news could have strengthened Trump’s leverage. According to CBP’s preliminary figures obtained by the Washington Post, 76,325 illegal aliens were apprehended at the border in February, more than any other month in over a decade since the decline of migration from Mexico. A record 40,325 family units arrived, blowing out the previous records by almost 10,000. Sadly, Trump already signed away his leverage to force a national dialogue over this issue.”

And that’s just then number of illegals who were caught. We have no idea how many slipped through and made it in undetected.

We are being overrun.

Conservative Review interviewed Mark Morgan, the former head of Customs and Border Patrol under Obama, and he elaborated on just how bad the situation is:

“When anyone opines that the apprehension numbers are at a historic low to support the claim that there is no crisis along our southwest border, they are leaving out a critical factor — the demographics of those illegally entering our country. In the early 2000s when apprehensions were around one million, the overwhelming majority were Mexican adults. They were processed and returned to Mexico within days through an expedited removal process.

Since 2014, we have seen a significant shift in who is illegally entering through the southwest border. Today, family units and unaccompanied minors seeking asylum account for more than 60 percent of those being apprehended. The essential difference is they are not removed! Through our country’s broken asylum laws and bad judicial precedent, this new demographic of illegal aliens are caught and released into cities throughout the country. So, even though last year the apprehensions dropped to 400,000 … the number of illegal aliens allowed into the United States has actually increased from a decade ago.”

The whole situation is fucked.

“Every few months, the equivalent of a major city of the most impoverished people are coming in and being released into our communities with no regard to our ability to assimilate them, pay for them, or deal with the social concerns and the criminal elements. Not to mention the fact that they are coming from countries dealing with major outbreaks of diseases we eradicated long ago.”

We need the biggest wall imaginable. We need to double the width of the Rio Grande and build a diversion canal from El Paso to San Diego.

0 comments on “The Floodgates Are Open at the Border”