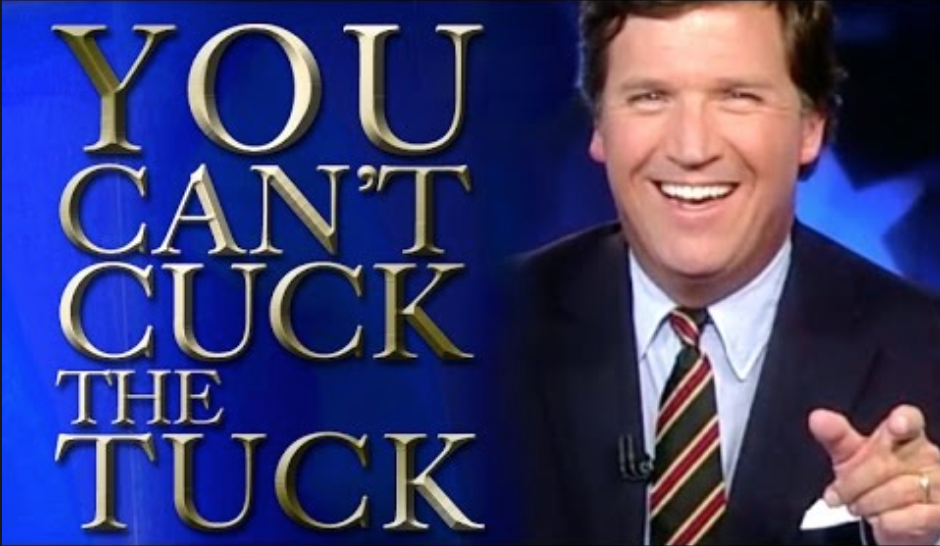 You know you’re becoming a major problem for the left/Uniparty when they try to destroy your career and reputation by digging up old dirt on you. It can almost be considered an honor in that the Uniparty views you as a serious enough threat that they feel compelled to try to take you out.

If they can’t fabricate a rape charge against you, they will try to find some old comments that violate today’s standards of political correctness. And so we have the Uniparty minions at Media Matters For America combing through Tucker Carlson’s life with the intent of finding something that will destroy his career.

Have a look for yourself and see what they found:

“During call-in segments on “Bubba the Love Sponge Show” between 2006 and 2011, the future Fox News host said that women enjoy being told to “be quiet and kind of do what you’re told” suggested that statutory rape isn’t like “pulling a child from a bus stop and sexually assaulting” them and described Martha Stewart’s daughter, Alexis, as “c–ty.”

True, true, and I don’t know Martha Stewart’s daughter Alexis but if Tucker thinks she’s “cunty” then I’ll take his word on it.

“In one 2009 audio recording, Carlson said, “I am not defending underage marriage at all — I just don’t think it’s the same thing exactly as pulling a child from a bus stop and sexually assaulting that child… The rapist, in this case, has made a lifelong commitment to live and take care of the person, so it is a little different. I mean, let’s be honest about it.”

“He then mentioned reading a story about a teacher who molested her 13-year-old student “28 times in one week,” and asked Bubba, “Are you physically capable of doing that or do you take your hat off to this kid?” Carlson added, “So my point is that teacher’s like this, not necessarily this one in particular, but they are doing a service to all 13-year-old girls by taking the pressure off. They are a pressure relief valve, like the kind you have on your furnace.”

I’m not entirely sure what’s going on here, it sounds like a female teacher molesting a female student?

“Other segments with Carlson on “Bubba the Love Sponge Show” had the conservative commentator suggesting the elimination of rape shield laws (“It gives the accuser all the power”), calling Martha Stewart’s daughter “very c—y,” and Britney Spears and Paris Hilton “two of the biggest white whores in America.”

Again, where are the lies here?

“CARLSON: By the way, women hate you when they do you wrong and you put up with it.

CARLSON: Because they hate weakness. They’re like dogs that way. They can smell it on you, and they have contempt for it, they’ll bite you.

CALRSON: I mean, I love women, but they’re extremely primitive, they’re basic, they’re not that hard to understand. And one of the things they hate more than anything is weakness in a man.”

100% true. He’s not calling women dogs in a demeaning way; he’s talking about how dogs seem to have a supernatural ability to “smell” fear or badness in people.

The Uniparty is going to have to do a lot better than this if they’re going to take down Tucker Carlson.

The problem for the treacherous Uniparty character assassins is that not only was basically everything Carlson said in these supposed inappropriate remarks true, Carlson is refusing to grovel and beg for the Uniparty’s forgiveness:

And the Official Uniparty Propaganda outlets certainly do have their panties in a bunch over Tucker’s refusal to apologize:

Already the story is “Tucker refuses to apologize,” rather than Tucker’s comments themselves. This is how you can tell the whole thing was a sham: they’re visibly upset that they were unable to get him to cave. Their obvious disappointment over Tucker’s refusal to apologize reveals that an admission of wrongdoing was the whole point of unleashing this smear on him.

And admission of wrongdoing would then open the door to ousting him. “The only way you can Repent for your sins, Tucker, is to resign in disgrace. Then, perhaps one day, the Uniparty may allow you to reinvent yourself as a ‘reformed’ Conservative™ who exists to bash Trump 24/7, preach the virtues of mass immigration and diversity, and shill for permanent war in the Middle East.”

Isn’t it wonderful that in America 2019, we live in fear that we will wake up to find our strongest voices subject to slanderous allegations designed to destroy their careers?

This is how the Uniparty destroys its enemies. If you cause problems for them by speaking too much truth, eventually you will find yourself accused of sexual assault or making Inappropriate Comments About Women. It’s inevitable.

I’d been wondering when they would finally go after Tucker Carlson. The past two years he has been absolutely on fire with his positions on nationalism, immigration, demographic transformation, white genocide in South Africa, the crisis of the white working class, the Deep State and economic populism. It was only a matter of time before they tried to destroy him.

But the problem for them is that they have already tried to destroy Tucker’s life with a fake sexual assault accusation, and it fell apart. They couldn’t #MeToo him.

So they had to resort to this bullshit about things he said a decade ago.