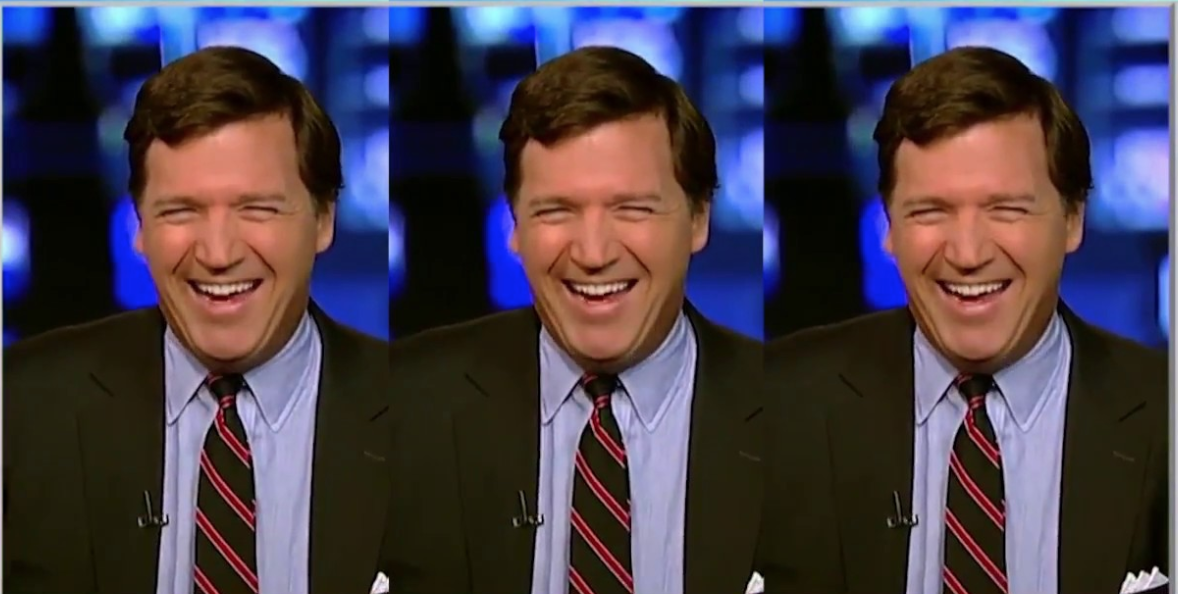 Here is the Uniparty’s latest attempt to dig up past comments made by Tucker Carlson:

All of this is out of context, of course, but I don’t care:

“Media Matters released additional resurfaced comments as Carlson’s show aired that featured the Fox News host making incendiary remarks years ago, including saying that “Iraq is a crappy place filled with a bunch of, you know, semiliterate primitive monkeys. That’s why it wasn’t worth invading.”

“In the remarks released Monday evening, Carlson denounced “whining” from black politicians who are, he said, “using racism as a defense.”

“The Congressional Black Caucus exists to blame the white man for everything, and I’m happy to say that in public because it’s true,” Carlson said in August 2008, according to Media Matters.

As with the stuff they “unearthed” about him yesterday, is anything he’s saying here untrue? Please point out the lie to me.

“HOST: “You’re in their homeland [Iraq], and you’re over there as an American, who they hate. And they want nothing more than the Americans off their soil, so they’re not going to play games.”

Last night, Tucker opened his show with a monologue that addressed the recent “controversy” over his claims. It was glorious:

“Carlson delivered a roughly seven-minute opening monologue on “Tucker Carlson Tonight” peppered with graphics that read “The Mob,” “Crackdown on Dissent” and “Liberal Hypocrisy.” While he did not reference any of his specific controversial comments, he doubled down on his initial refusal to apologize for them.

“Fox News is behind us, as they have been since the very first day,” Carlson said. “Toughness is a rare quality in a TV network, and we’re grateful for that.”

“We’ve always apologized when we’re wrong, and we’ll continue to do that,” he added. “That’s what decent people do. They apologize. But we will never bow to the mob, ever, no matter what.”

“But what if we stopped pretending for a minute?” Carlson asked. “What if we acknowledged what’s actually going on?”  Carlson described Democrats as “deadly serious” in their effort to “crush” those who oppose their ideology.

“Why are the people who considered Bill Clinton a hero lecturing me about sexism?” Carlson asked. “How can the party that demands racial quotas denounce other people as racist? After a while, you begin to think maybe their criticisms aren’t sincere.”

Tucker wasn’t done. Because he realizes it’s not just the Democrats who are out to get him: it’s the Uniparty.

“What’s interesting is how reliably the other side pretends that none of this is happening,” Carlson said, referring to Republicans.

“Republicans in Washington do a fairly credible imitation of an opposition party,” he added. “But on the deepest level, it’s all a pose.”

“The mob demands a response. Very often, the first people calling for the destruction of that person are Republican leaders. You saw it with the Covington Catholic High School kids. You see it all the time. [House Minority Leader] Kevin McCarthy spends half his day telling Republican members not to criticize progressive orthodoxy. [Former Speaker] Paul Ryan did the same before him.”

This man is a hero.

Here is the money quote:

“There’s really not that much you can do to respond,” he said on Monday’s show. “It’s pointless to try to explain how the words were spoken in jest or taken out of context or in any case bear no resemblance to what you actually think or would want for the country. None of that matters. Nobody cares. You know the role you’re required to play: You are a sinner, begging the forgiveness of Twitter.“

Exactly right: never apologize to the these horrible, horrible people.

1 comment on “After Failing to Inflict Any Damage on Tucker Carlson With Unearthed Comments, Uniparty Tries Again”