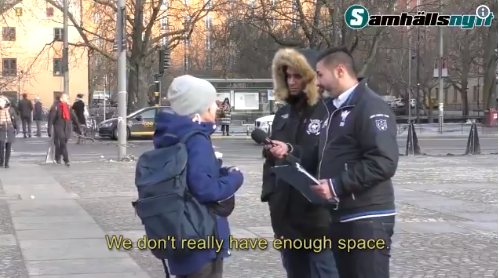 “NO HUMAN BEING IS ILLEGAL!”

Just not in my home:

😂😂 This is superb. Loads of virtue-signalling Swedes say they’d take in refugees, then make excuses when the interviewer produces a refugee looking for a house to live in. pic.twitter.com/KI83uutVVd

A guy goes around in Sweden asking people if they support letting in “refugees.” They all answer affirmatively.

Then he asks them if, hypothetically, they’d be willing to take a refugee into their own home. They all answer affirmatively again.

But then he brings out Ali, a young Middle Eastern guy, and asks the Swedes if they’d be willing to let Ali come home and live with them right there on the spot.

Would they be willing to back up their compassionate rhetoric with actual compassion?

I’m sure you’ll be shocked to learn that no, no they would not be willing to do that.

Not a single one says yes. They’ve all got some excuse for why they can’t.

I don’t get it. Diversity is supposed to be our strength, and yet none of these Swedes want to make their households stronger through diversity.

We must expose and humiliate these virtue signaling white liberals who demand we take in a limitless amount of refugees but then want nothing to do with the refugees once they are actually here.