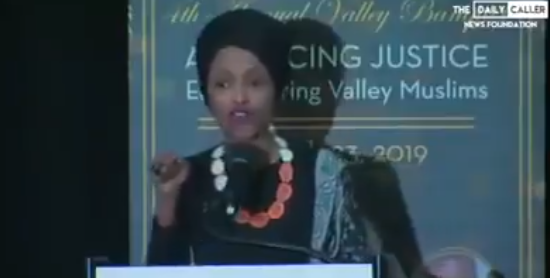 The more Diverse America becomes, the more commonplace this type of thing will become:

Ilhan Omar mentions 9/11 and does not consider it a terrorist attack on the USA by terrorists, instead she refers to it as “Some people did something”, then she goes on to justify the establishment of a terrorist organization (CAIR) on US soil. pic.twitter.com/ixP3BJfqxS

Is it really such a surprise that a Somali Muslim gives zero fucks about 9/11, and dismisses it as “some people did something”? And that she believes the real problem is supposed discrimination against Muslims following 9/11?

This is what Diversity is, America.

“But she’s an American! How could she say this?”

She’s not an American. She’s a Somali Muslim whose loyalties lie anywhere but with America, who simply happens to reside in America.

She may be an American citizen, technically, but what does that even mean anymore? We hand out green cards like Halloween candy nowadays.

Diversity means your country is gradually repopulated with ungrateful people who hate you and hate your country.

Get used to being ruled by anti-American demagogues like Ilhan Omar, America.

Ilhan Omar is the future.

They didn’t think the Diverse immigrants would eventually hold positions of power, did they?

They didn’t think Diverse immigrants would hold on to their radical, anti-American views once they moved here, did they?

They didn’t think the Diverse immigrants, who were given the privilege of coming to the greatest country in the history of the world from miserable third-world hellholes, would be this shockingly ungrateful, did they?

Americans were led to believe Diversity simply meant more foreign cuisine options around town and one or two “international” novelty students at their kids’ schools.

Sorry. That’s not how it works.

Good on Rep. Dan Crenshaw (R-TX) for calling out Omar over her treasonous remarks, but Crenshaw is a typical Domesticated Republican who will never dare to bring attention to the reason this is happening:

First Member of Congress to ever describe terrorists who killed thousands of Americans on 9/11 as “some people who did something”.

Republican politicians are #Outraged over Omar’s remarks, but then they turn around and say “Diversity is Our Strength” as if the Diversity isn’t the precise reason we now have a Member of Congress dismissing 9/11 as “some people did something.”

What did you think was going to happen when you flung open the gates to the world?

Did you just imagine you could bring in all these people from incompatible cultures and America wouldn’t change at all?

Ilhan Omar is what happens when you fling open the gates to any and everyone.

2 comments on “Diversity is Our Strength: Ilhan Omar Refers to 9/11 Terrorist Attacks as “Some people did something””