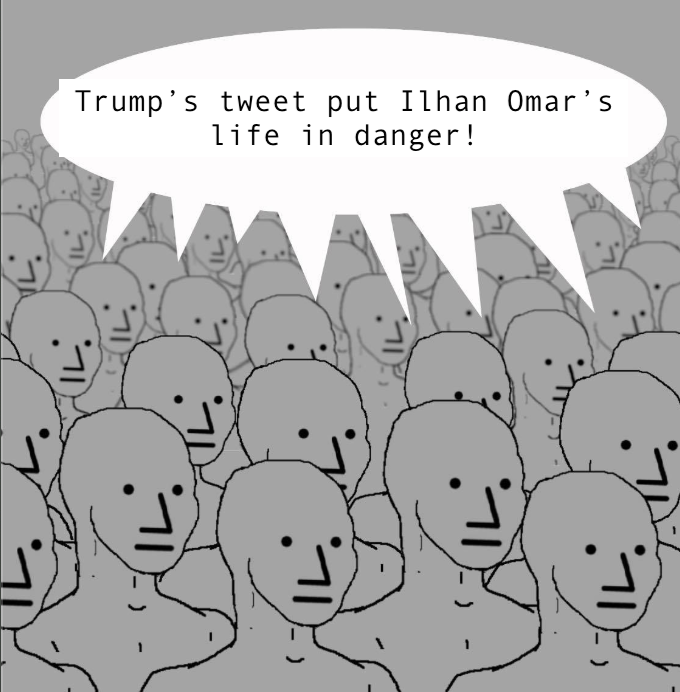 You may recall Minnesota Congresswoman Ilhan Omar’s recent remarks where she dismissed the 9/11 terrorist attacks that killed 3,000 people as “some people did something.” In response, President Trump tweeted this video out:

WE WILL NEVER FORGET! pic.twitter.com/VxrGFRFeJM

Almost immediately, fascist liberals seized on the video as an opportunity to ban anyone from criticizing them, on the grounds that doing so is an “incitement to violence.”

.@realDonaldTrump’s dangerous video must be taken down. I have spoken with the Sergeant-at-Arms to ensure that Capitol Police are conducting a security assessment to safeguard Rep. @Ilhan Omar, her family & her staff. They will continue to monitor & address the threats she faces. pic.twitter.com/Grb9c8S18d

These liberals are un-fucking-believable. They will never–can never–stop playing the victim. “Omar’s family is in danger because of Trump’s tweet!”

Get the hell outta here.

Democrat after Democrat repeated the same talking point that any criticism of a Democrat puts a Democrat’s life in danger, and so nobody is allowed to criticize Democrats anymore:

Members of Congress have a duty to respond to the President’s explicit attack today.@IlhanMN’s life is in danger. For our colleagues to be silent is to be complicit in the outright, dangerous targeting of a member of Congress.

We must speak out.

No one is “coming for you.” These people are so desperate to be oppressed.

President Trump understands the weight his words carry. His tweet about Congresswoman Ilhan Omar puts her life & her family’s lives at risk. Our outrage should be nonpartisan. That it’s not will only give him license to continue to incite violence.

These NPCs all repeat the exact same talking points.

Ilhan Omar is literally pro-Islamic Terrorism and somehow she’s the one whose life is at risk? Again: un-fucking-believable.

Here’s how it really is:

Have a nice weekend!

There is no incitement to violence whatsoever in Trump’s video. None. It’s just Ilhan Omar’s own words mixed in with footage of 9/11.

You want to see real incitement to violence? CBS, one of the largest media corporations in America, has a primetime show coming out literally encouraging violence against white people on the ground that they’re “Nazis”:

This is how the left act. I've experienced this first hand. They feel justified to attack, you go "ok I guess we're fighting now" then they cry and act like a victim and say you are the aggressor. Every. Time. pic.twitter.com/kBATJu2aDM

And of course there’s so many more examples:

One of the most enduring truths of American politics in 2019 is that whatever the left is accusing us of, you can be certain the left is guilty of that very same thing.

1 comment on “New Rule: You Are No Longer Allowed to Criticize Democrats, At All, Ever, Because it Puts Their Lives in Danger”