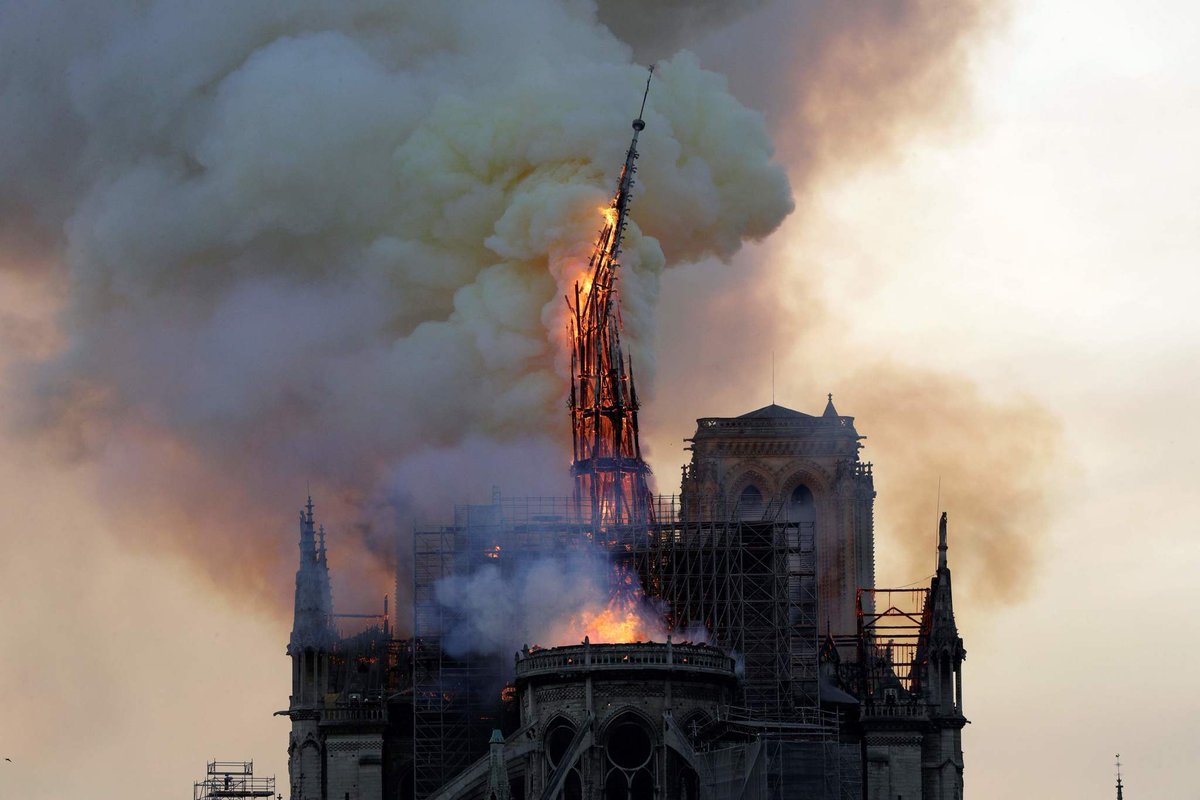 Because the most important thing here is that nobody even asks if the burning of the Notre Dame Cathedral had anything to do with the mass Islamic immigration France has undergone over the past several decades:

BREAKING: Arson & terrorism have been “ruled out” as reasons for the Notre Dame Fire as “for now”, French prosecutor says. pic.twitter.com/9FWsoAFtgW

That was sent at 5pm US Eastern Time, meaning about midnight Paris time.

What a speedy investigation.

But we all just know it couldn’t have been Islamic terrorism, even though Muslims were photographed at the scene with huge smiles on their faces as the ancient cathedral was engulfed in flames in the background:

We see you, you filthy animals. pic.twitter.com/1YN4arzpQi

Yes, it is utterly outrageous for anyone to ask whether or not this was arson.

Thousands of Muslims were reacting with smiley faces on a Facebook stream of the fire:

A brief summary of who is responding to the tragic Notre Dame fire with 'smiley faces' on Facebook. Appalling. pic.twitter.com/OBANPl9Wpv

Even if Muslims didn’t do it, many are reacting as if they did, or at the very least as if this is a victory for them.

But still, it’s a “Conspiracy Theory” to wonder if terrorists were behind this.

IT WAS AN ACCIDENT, OKAY?

And in 2016, a 22 year old Muslim woman was caught trying to blow up the Notre Dame Cathedral with a car full of gas canisters. She was sentenced to prison three days ago:

Only THREE days ago in France one of three women involved in a foiled plot in 2016 to blow up a car packed with gas canisters near the Notre Dame cathedral in Paris was sentenced to eight years in prison.

Hoping this is one hell of a terrible coincidence.https://t.co/tA4If5J4e0

the famous saint sulpice church in paris was lit on fire just last month. the month before that an attack on st. nicholas in northern france, and another fire lit in saint alain cathedral in south-central france.

there seems to be a recurring theme here.pic.twitter.com/0Swua0pHRW

Police said the Saint Sulpice fire was “not an accident.” The Notre Dame burning is simply the latest in a string of attacks on Christian sites in France:

“While Notre Dame is undoubtedly the most well-known landmark to be affected, Paris’ second largest church, Saint-Sulpice, briefly burst into flames on March 17, the fire damaging doors and stained glass windows on the building’s exterior. Police later reported that the incident had not been an accident.

“The images of flames in Saint Sulpice church this weekend are one more example of the violence committed against Catholics,” said Philippe Gosselin and Annie Genevard of France’s National Assembly, tying the incident into a wider trend of attacks on Catholic places of worship.

February saw a series of such attacks across France. In one incident, a cross of human excrement was smeared on the wall of the Notre Dame des Enfants in Nimes, the vandals also looting the church and spreading consecrated wafers in the garbage.

The same month, the altar at Saint-Alain Cathedral in Lavaur was set on fire, while statues and crosses were smashed throughout the premises. Two teenagers were later arrested in relation to the incident.”

But yes, the mere suggestion that the burning of Notre Dame was not an accident is so far-fetched, so inappropriate, and so dangerous that Fox New’s Shep Smith lectured a French politician for even entertaining the possibility:

Shep Smith is such an arrogant pompous douche. Fox News is so horrid other than Tucker and Hannity.

What a complete jackass Shep Smith is.

IT WAS AN ACCIDENT!

For what it’s worth, that French politician, Phillippe Karsenty said this before Shep Smith erupted on him: “Of course you will hear the story of the politically correct which will tell you it is probably an accident.”

Many in France are not buying the “official” story.

Whether it was terrorism or simply negligence, the Burning of the Notre Dame Cathedral is unavoidably a sign of the decay of Western Civilization.

The Notre Dame fire is a metaphor for the attitude of Western European leaders towards their own national cultures over the past few decades.

#NotreDame Cathedral ablaze is the perfect symbol of the modern age, it's almost as if the building set itself on fire to be done with seeing native Europeans replaced and spat on, the spiritual life of Europe crushed and mocked. The continent turned into a supermarket#Paris pic.twitter.com/B1wLXqEUWM

Whether it was terrorism or neglect, this is a terrible day for all of us. The sorry state of Western Civilization was on full display as that 850 year old Cathedral burned.

As for me, my two cents is that when one of the important sites in Christianity, one of the most recognizable and iconic cathedrals on the planet, goes up in flames during the holiest week of the Christian calendar, I’m sorry, but I just refuse to believe that’s a. a coincidence and b. an accident.

0 comments on “While Notre Dame Cathedral Was Still Burning, “French Authorities” Had Already Ruled Out Terrorism/Arson as a Cause”