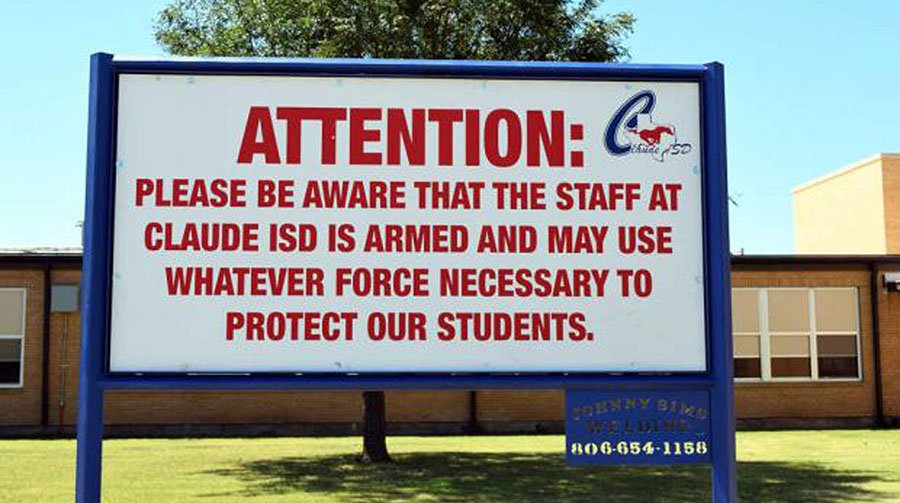 Hopefully Florida is the first of many states to implement this no-brainer policy:

It’s the law now: In Florida, teachers can carry guns at school https://t.co/tWZg0A9zjP

I cannot for the life of me understand why people oppose this.

“Back-to-school shopping: one bullet-proof vest.” Does this dumb person holding that sign realize she’s saying teachers are not to be trusted with guns?

Do they not. . . trust themselves with guns? Are they saying teachers are not to be trusted with guns?

Are teachers more liable to pull a gun on one of their students than some mentally defective, fatherless problem-child pumped full of psychoactive drugs?

And this doesn’t require teachers to carry guns. It only allows them to, if they choose.

You have to be brainwashed beyond all hope to oppose this.

I’m sure the liberal response here will be that arming teachers isn’t the answer–gun control is the answer.

They’d prefer to just disarm everyone so only Our Lord & Savior, The Government has access to guns.

Hello, dummies? Did we not go over this with Parkland? The armed officer whose sole job it was to protect the students from potential shooters cowered in fear outside while the shooting was taking place.

It takes a while for the police to arrive after they’ve been notified of the shooting. By the time they arrive there are already many casualties.

And the whole idea of “gun control” is nonsensical: just because some politicians sign a piece of paper doesn’t magically make all the guns disappear.

The bad guys won’t follow the law. All you’ve done is take the guns away from good, law-abiding citizens.

The bottom line is that we are in a vicious cycle when it comes to school shootings. When they happen, we publicize them all over the news (except the recent Colorado shooting where the shooter was a Trump-hating leftwing tranny, the “media” doesn’t want to talk about that at all), which only further incentivizes the next psychopath to shoot up his school. All the while our schools are the softest targets imaginable for bad people: most of the schools in this country are “gun free zones,” which are essentially huge, blinking neon signs for wolves that say “UNPROTECTED SHEEP READY FOR SLAUGHTER.”

When a store owner or a home owner experiences a break-in, he will then take steps to beef up security by buying a gun, cameras and a security system. It’s common sense. A woman who is mugged walking home one night will, at the very least, start to carry mace around in the future. Ideally she’d buy a handgun.

After more than a dozen school shootings in the past 20 years, you’d think by now we would learn our lesson: our schools are soft targets and all the bad guys know it.

The idea behind arming teachers is to discourage potential future school shooters. No longer are our schools shooting galleries for Zoloft-addled demons.