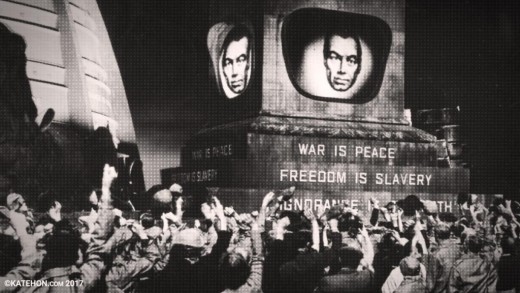 Please excuse me while I pick my jaw up off the floor:

Propaganda from rulers of the dystopian world of Orwell's 1984:
"War is Peace. Slavery is Freedom. Ignorance is Strength."

They really just don’t give a fuck anymore, huh?

They’re like, “We’re telling massive lies straight to your faces and we don’t even care who knows it lol.” They want you to know that there’s nothing you can do to stop them.

The end-goal of their propaganda is now more obvious than ever: depopulation.

Of course they’ve convinced the useful idiots in the streets that abortion is about a “woman’s right to choose,” but it’s not. It’s about depopulation and eugenics.

Haven’t you noticed just how many of their policy initiatives result in depopulation?

Do you think the elites are unaware of the fact that the US has aborted over 61 million babies since 1973? And that over 1.5 billion babies have been aborted worldwide since 1980?

Virtually nothing happens that they don’t want and plan to happen. You cannot seriously believe that the Uniparty elite doesn’t know exactly what the score is.

The end-goal is you not having kids:

If you want to Save The Planet™, do your part by not having children!

Because A Study™ said so!

Depopulation. If women are working into their 30s and beyond, they’re having fewer kids. Working women are great the for the Uniparty: first of all, they’re an untapped supply of labor, which in turn drives down the price of labor. Second of all, working women aren’t having children, leading a declining birthrate, which in turn the Uniparty’s propaganda outlets will use to say, “We are in a population crisis! The only way to solve it is with millions of more poor, third-world immigrants!”

Why does the elite celebrate and promote homosexuality? Because it’s sterile. The elite wants more and more gay people because that means fewer births.

I already know what you’re going to say: “But you’re born gay! How can the elite create more gay people?!”

First of all, you are not born gay. There is no evidence of any “gay gene” existing, and that’s according to a 143-page John’s Hopkins study from 2016:

“Studies of the brains of homosexuals and heterosexuals have found some differences, but have not demonstrated that these differences are inborn rather than the result of environmental factors that influenced both psychological and neurobiological traits,” the report explained. “One environmental factor that appears to be correlated with non-heterosexuality is child sexual abuse victimization, which may also contribute to the higher rates.”

The study was unable to conclude specifically why people are gay, but it was clear in stating that there is not anywhere near sufficient evidence to prove people are born gay.

It’s one of those things people just believe because, well, that’s what Good People believe. Plus they’ve heard it repeated a bunch of times on TV, in movies, on the news, etc.

This goes to show you that repeating something enough times does, in fact, make it “true”–at least in people’s minds.

But “Born This Way” has never been proven by actual science.

Which means sexuality is either a conscious choice, or it’s a product of external/environmental influences. What might those external influences be? Well, like the study said, being sexually abused as a child is a big one. Other non-sexual forms of emotional trauma are another. Then there’s the influence of viewing pornography starting at an early age. And then finally there’s the cultural/social angle of it, meaning propaganda and indoctrination.

How else do you explain the fact that Millennials are “the gayest generation“?

Millennials are also the generation that has been most bombarded with pro-gay propaganda. Big coincidence, I’m sure!

In 2017, NBC News reported the results of a survey that showed 20% of millennials identified as LGBT.

Gay people have historically been around 2-4% of the population, and now all the sudden we have a generation that’s 20% gay–meaning 5-10x gayer than previous ones?

You’re telling me that’s not a product of cultural brainwashing and propaganda?

If being gay was entirely biological and natural, we would expect the gay proportion of the population to remain static or at least fluctuate very little over time. If one’s sexuality has nothing to do with external factors, we would expect the gay percentage of the population to be the same today as it was in 1919, 1519 and even 2019 B.C. But it’s not. All of the sudden it’s skyrocketing.

So that means either people today are being brainwashed to be gay or the Uniparty is putting something in the water to turn people gay.

Could be both, honestly.

It’s pretty simple: Pro-gay propaganda makes it socially desirable to be gay. More people than ever nowadays are claiming to be gay. It’s obvious what’s going on.

Folks, there are no accidents in politics. This is not all just a coincidence.

Today’s ruling Uniparty elite is every bit as obsessed with eugenics as the Nazis were. They just go about it in less-obvious ways.

The Uniparty Elite may not have death camps (at least that we know about) but 61 million aborted babies in the US since 1973 speaks for itself.

And the above whopper by the New York Times claiming that pregnancy kills and abortion saves lives is not the first time America’s supposed “paper of record” has gone to bat for the Depopulation Agenda:

Parenting is so hard these days. Better to just avoid it altogether.

“But,” you may ask, “if the Elite want depopulation, then why do they want more immigrants to solve the supposed population crisis?”

Because poor immigrants from the third world are easily controlled. Just give them Free Shit from the government and they’re yours.

The goal is to depopulate America of Americans and repopulate it with “New Americans” who will be subservient to the Uniparty Agenda.

If you haven’t noticed, the Democratic Party’s dominance of national elections is based entirely on foreign-born voters:

No wonder Republicans have only won the popular vote once since 1988.

The goal is to sever our connection to 1776 because of what America As Founded represents: individual liberty, freedom of speech, self-determination, actual human empowerment, self-government, the right to bear arms, etc.

All of those things are Problematic for the Uniparty. And so this is why they want to depopulate America of Americans and repopulate it with poor foreigners who don’t really understand what it means to be free, and who have no connection to 1776.

Are you getting it now?

The Uniparty elite wants all the statues and monuments to the past erased and removed. That’s all part of the plan. Don’t you understand how it works by now? First they come for the stuff that nobody will defend, like the Confederate Statues, then they’ll come for the George Washingtons and Thomas Jeffersons–because they owned slaves!

And, oh, wouldja lookit that? Mayor Pete Buttwhatever is now calling for the erasure of Thomas Jefferson’s name from American society.

They come after the indefensible targets first, then they go for their real targets. That’s why they banned Alex Jones and Milo first. Then they’ll come for the “more reasonable” dissidents like Paul Joseph Watson and Steven Crowder, etc.

They want this country to completely start over–without any of that bullshit the original Founding Fathers came up with, like the Bill of Rights and the Declaration of Independence.

They want an America where the people don’t know what it means to be free. And they’re gonna get it, too.

Depopulation is the means; power and control are the ends.