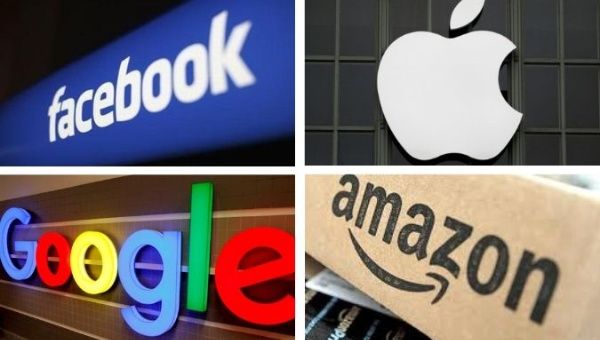 If this actually goes all the way, it will be perhaps the most important thing President Trump has done and will do during his tenure. Megacorporations are killing free speech in this country right before our eyes and something must be done about it.

Wall Street seems to believe the Silicon Valley giants are in trouble:

The DOJ’s preparations to investigate Google, first reported late Friday, mark the Trump administration’s first concrete step to scrutinize the potentially anti-competitive conduct of a large technology firm. On Monday, a person familiar with the matter said the FTC will oversee antitrust scrutiny into whether Facebook’s practices harm competition in the digital market. Reuters reported that the DOJ has been given jurisdiction over a potential probe of Apple.

You probably noticed Amazon was among the companies that fell even though they were not one of the ones named as being under investigation. But Amazon looks likely to join the club:

“Amazon could also be scrutinized as a result of a new agreement between regulators that puts it under the jurisdiction of the FTC, the Washington Post reported over the weekend.”

All told, the tech giants lost a combined $137 billion in market cap on the news that they’re likely to come under antitrust investigation:

Facebook has seen this coming for a while now. A Business Insider article from May 12 detailed Facebook’s recent antitrust lawyer hiring spree.

Here’s the problem for Facebook: all the expensive lawyers in the world can’t change the fact that Facebook is a monopoly and needs to be broken up. They can and certainly will try, but the truth is the truth.

And if Facebook and Co. prevail and manage not to be broken up, it will not mean that they are not monopolies, but rather that justice was not done.

Outside of immigration, Big Tech Fascism is the issue of our time. Free speech itself is at risk if these Tech Giants are permitted to exist in their current forms and pursue their current policies.

The First Amendment only protects us from the government. It doesn’t protect us from private corporations like Facebook and Google, and so they have been conducting a digital purge of dissident voices, shadowbanning and outright banning any and all individuals who do not preach Politically Correct Values.

If the Tech Giants are ultimately broken up, it will take years of investigation and subsequent legal battles before it actually happens.

In the meantime, Trump and Congress must declare that, given their ubiquity and importance in modern American life, social media platform access is not a privilege bestowed to select individuals by all-powerful, unaccountable corporations, but rather a civil right guaranteed for all.

Furthermore, we must guarantee that individuals on social media platforms cannot be discriminated against because of their political views. This means that shadowbanning, burying in the search results, and de-monetizing due to political views must also not be allowed.

Because the main problem with the Silicon Valley giants is not that they’re monopolies. There have been many monopolies in American history that did not infringe on Americans’ natural and civil rights. For all the reasons they were ultimately broken up, Ma Bell and Standard Oil weren’t silencing political dissidents and enforcing nationwide conformity to the Establishment’s preferred political agenda. US Steel was not controlling and manipulating Americans’ exposure to news and information with the intent of

This is what makes the 21st century monopolies wholly different beasts from the monopolies of the past. Yes, the Tech Giants need to be broken up, but it’s foolish to think doing that alone will solve all our problems.

In other words, making YouTube leave Google and become its own company doesn’t guarantee YouTube will no longer be biased against conservatives.

There still has to be an expansion of the First Amendment that guarantees platform access and freedom from discrimination due to political views as civil rights for all.