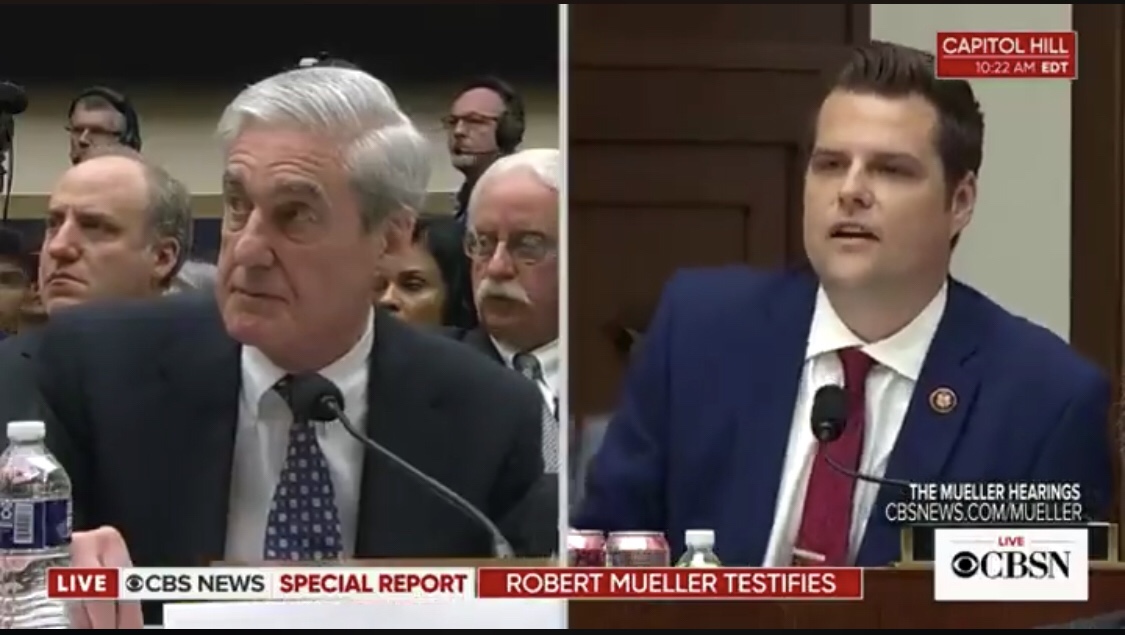 The collapse of the Russian Collusion Conspiracy theory is a stark lesson for a whole new generation that the media and supposed authorities in this country are complete and utter liars.

Watch as the media spends nearly two years boldly proclaiming that “the end” was near for Trump, that the walls were closing in and that Trump was finished due to a Russian Collusion “scandal” that the media made up:

Back by popular demand: two years of Russiagate coverage in two minutes | pic.twitter.com/vMekLDO3Kt

Today, the left’s last best hope to impeach Trump after all else had failed, Robert Mueller, was summoned before Congress by Desperate Democrats because apparently they believed Mueller had more to say about Trump’s supposed criminality than he wrote in his office’s 448-page report, released several months ago.

I really have no idea what the Democrats thought today would achieve for them. Mueller has long since released his office’s report and it concluded there was no collusion, no obstruction and no reason to impeach Trump. Did they think Mueller was holding out? Or were they looking for some soundbite they could, through their dishonest accomplices in the media, misconstrue and manipulate into a justification for impeachment. It’s probably the latter.

But unfortunately for them, their champion Mueller looked like a doddering, senile old man who was used mainly as a legitimacy-granting figurehead for the Special Counsel investigation, which was staffed up and carried out by hardcore partisan Democrats.

The old man was completely lost during today’s hearing. At one point he apparently claimed (or admitted, your choice) that he did not know what Fusion GPS was. Fusion GPS was the origin of the Steele Dossier, which itself was the basis for the entire Russiagate conspiracy theory and subsequent investigation:

He was either lying or telling the truth and I’m not sure which is worse.

Rep. Matt Gaetz (R-FL), who is turning into a real superstar, took Mueller to task over Mueller having hired Peter Strzok and an unnamed FBI agent who said “Vive La Resistance!” to the Special Counsel investigation. This exchange between Gaetz and Mueller was really indicative of how the whole thing went:

WATCH: @RepMattGaetz grills Robert Mueller over having members on his team who had a clear bias against President Trump. #MullerHearings pic.twitter.com/fLyb86r6nS

Just brutal. I almost felt bad for Mueller. He was left stuttering.

Gaetz had more highlights as well:

Gaetz: Can you state that the Steele dossier wasn't Russian disinformation?
Mueller: Dossier is before my time.
Gaetz: So were Manafort's crimes. You charged him.
Mueller: Not my purview.
Gaetz: IT IS IN YOUR REPORT! pic.twitter.com/e0hHqW0wcC

The whole thing was just an embarrassment for Democrats.

Humiliating: Rep. Hakeem Jeffries spends five minutes trying to get Mueller to agree that Trump committed obstruction. At what was supposed to be the climax of the questioning, Mueller responds: "I'm not supportive of that analytical charge"

So Russiagate is now officially over, dead and buried. Of course Democrats are going to keep trying to dig it up and breathe life into it endlessly–I’m sure they’ll want to summon other members of the Mueller team to Capitol Hill after Mueller himself didn’t give them what they wanted. But the verdict in the court of public opinion is in: this whole thing was bullshit.

I hope most Americans realize today that they were lied to about Trump and Russia for nearly three years by the media, the entertainment industry and the political establishment. It was all lies.

I also hope most Americans, having realized that the elites lied to them about Russiagate, now start to wonder what else the elites have been lying about. Russian Collusion was not the first lie, nor will it be the last.

In conversations over the course of the two-plus year Russian Collusion Witch Hunt, people asked me if it’s really true that Trump colluded with the Russians. I said all along absolutely not. It’s all been made up.

People had a hard time believing that when I would tell them. They just couldn’t believe that the big cable news channels, the major newspapers, Hollywood and the late night talks shows were all lying.

Most people in my generation are too young to remember the WMD fiasco during the Iraq War, but now we have our own version of it in the Russiagate Hoax.

The mainstream media should be forever discredited now that the conspiracy theory they bombarded the nation with for two years has gone down in flames. No one should ever again trust CNN, NYT, Bezos Post and all the rest given the absolute certainty with which they promoted Russiagate. Tune them out forever.

And then ask yourself, “If they lied about Russiagate, what else are they lying about? How far back does the lying go?” Because that’s the real rabbit hole.

1 comment on “The Russian Collusion Hoax Should Be a Lesson: Don’t Trust the Elites”