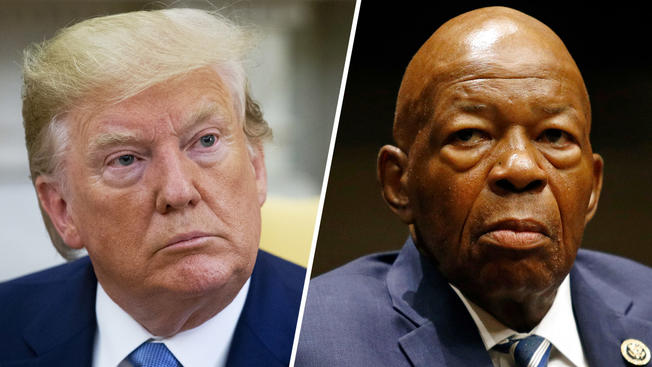 I’m not sure exactly what Elijah Cummings said about Trump that set him off–nor do I care since it was probably a bad-faith lie–but Trump was not having any of it:

Why is so much money sent to the Elijah Cummings district when it is considered the worst run and most dangerous anywhere in the United States. No human being would want to live there. Where is all this money going? How much is stolen? Investigate this corrupt mess immediately!

As you probably are aware now, this set off a frenzy among the Blue Checks. Everyone knows white men like Trump are not allowed to criticize black politicians like Elijah Cummings, no matter how valid the criticism is.

….a look, the facts speak far louder than words! The Democrats always play the Race Card, when in fact they have done so little for our Nation’s great African American people. Now, lowest unemployment in U.S. history, and only getting better. Elijah Cummings has failed badly!

How dare Trump point out that the Democrats that have had single-party rule of Baltimore since 1963 haven’t improved anything–and in fact things have gotten exponentially worse over that time.

First of all, let’s just look at the facts:

1. Baltimore is incredibly dangerous. It’s actually the 21st most dangerous city on the planet:

It should be common knowledge that Baltimore is a third-world warzone. HBO even made a hit show about it in the early 2000s:

Many consider HBO’s The Wire the greatest crime drama ever written. The entire series is about what a hopelessly corrupt shithole Baltimore is.

Everyone knows it. Yet the media feigns outrage.

2. Baltimore is infested with rats. Animal Planet once ran a special on the “Top 10 Rat Infested Places” in the world and Baltimore was in it, along with a place in Alaska literally named “Rat Island.” Here is the entry for Baltimore:

“Baltimore’s rat problem is bad enough that at one point, rats tunneled so intensely beneath a particular area of pavement that when garbage collectors drove over it, their truck sunk up to its axles. Rats in the vicinity took full advantage of the mishap and swarmed the truck, gorging on the garbage inside.

Baltimore also enjoys the dubious distinction of being a hotspot for rat-related research, beginning during World War II and continuing today, much of it carried out at Johns Hopkins University.”

Last year there was even a documentary made about Baltimore’s infamous rat problem:

Elijah Cummings has done such a wonderful job representing Baltimore that people made a documentary about its Rat (aka vermin) problem.

.@MayorPugh50, 50th Mayor Of #Baltimore said this about an East Baltimore neighborhood:

Sounds pretty rodent-infested to me.

3. Elijah Cummings is a corrupt scumbag who has been in Congress since 1996 and was a State Representative from Baltimore for 13 years prior to that. During those 36 years his city has fallen apart. Not sure how it’s controversial to blame Baltimore’s problems on someone who has been in power for three and a half decades. What has Elijah Cummings done to make Baltimore a better place? You’d think that after 36 years there would be some improvement–in the crime rate, in tackling the rat infestation, in rebuilding the dilapidated slums–to show for his time in power–anything at all.

But no. We’re instead told to believe that Cummings is doing a great job and that Baltimore is in such bad shape because of Racist White People. Anyone who thinks otherwise must be a Racist.

I’m glad we’re finally asking the important questions here: Why are Democrats given a free pass for lining their pockets while their districts are unlivable warzones that never get any better? It’s not just Cummings’ district in Baltimore, either. It’s urban districts all across the country–notably here in Chicago.

How come we’re not allowed to point out that Democrats have had single-party rule over most American cities and yet the cities are a mess?

On top of all this, Elijah Cummings and his wife are scammers:

“Rep. Elijah Cummings’ wife runs a nonprofit that has taken millions from interest groups with business before the Oversight Committee that Cummings chairs.

Cummings’ wife did not answer a request from The Daily Caller News Foundation to review the forms, which a lawyer said was illegal.

A watchdog group filed a complaint with the IRS saying that Cummings’ family could be trading favors for money, and told TheDCNF about the wife’s “creepy” and “weird” conduct when it spoke with her.”

I’m sure it’s racist to point this out, too.

As usual, Democrats are not angry because Trump lied. They’re mad because he dared speak a truth most Republicans would be terrified to broach.

However, it was none other than Bernie Sanders who said Baltimore was like a third world country in 2015:

Bernie Sanders visited Rep. Elijah Cummings district in 2015. He was shocked by what he saw.

"You would think that you were in a third world country," Sanders said. "We're talking about a community in which there are hundreds of buildings that are uninhabitable." pic.twitter.com/nqlCJS34RM

But when Trump says it, it’s racist.

Crazy Bernie Sanders recently equated the City of Baltimore to a THIRD WORLD COUNTRY! Based on that statement, I assume that Bernie must now be labeled a Racist, just as a Republican would if he used that term and standard! The fact is, Baltimore can be brought back, maybe……

Now, of course, because Trump dared to point out that Baltimore is a rat-infested warzone, all of the sudden the left has rallied around Baltimore as this wonderful utopia. They just love Baltimore so much now:

On a flight back to Baltimore.

I’m sure all those cheering passengers are headed straight to the West Baltimore ghetto with its dilapidated slums and astronomically-high murder rates, right?

Nah. They won’t go anywhere near it. They’re just virtue-signaling their disdain of the Nasty, Racist Orange Man.

Any of you Republican patriots plan on criticizing the President for calling part of our country a “disgusting, rat infested mess” this morning?

We’re supposed to criticize him for telling the truth? Got it.

Again, these Dem Blue Checks aren’t angry at Trump for mischaracterizing the city of Baltimore. They’re mad at him for daring to call attention to their decades upon decades of failure and corruption in the city.

Even Fox News’ Chris Wallace tried to get on the Blue Check Outrage Bandwagon and lie about what Trump said:

No, "vermin" is a reference to "vermin" — the rats etc. that infest Democrat-run cities. Especially Los Angeles, which, according to Dr. Drew, is near bubonic plague because there's no plan for rats (and CA is about to ban rodenticide). https://t.co/dySCZzvMRH via @BreitbartNews

What a dishonest rat this Chris Wallace is. Trump has a way of getting people to show their true colors, and our supposed ally at Fox News, Chris Wallace, has shown his. Disregard anything this lying Uniparty shill says.

Of course, this is what the dishonest left has to do all the time. They have to distract from the real issues because their continued reign depends on people either ignoring or being afraid to discuss the real issues in this country. They have to conflate Trump’s criticism of the people in charge of Baltimore with criticism of the everyday people who live there because they know the people in charge are indefensible.

They have to muddy the waters. It’s all they can do:

The current state of Baltimore is a real thing the impeachment inquiry is a phony, political stunt.

I wish we had an honest media that could fairly call balls & strikes. https://t.co/eQ9Hyquy4c

“How dare Trump talk about the real problems in Baltimore instead of our stupid, cooked-up Witch Hunt over a crime that never happened and investigation that shouldn’t have happened!”

Translation: WE control the conversation, damnit! Stop letting the Orange Man distract you from what WE want to talk about!

Trump summed it all up:

There is nothing racist in stating plainly what most people already know, that Elijah Cummings has done a terrible job for the people of his district, and of Baltimore itself. Dems always play the race card when they are unable to win with facts. Shame!

Bottom line: it’s long past time we started talking about the sorry state of America’s inner cities. Baltimore is just the beginning. There are parts of this country that are virtually indistinguishable from third-world hellholes, and that’s unacceptable. We need to start pointing the finger at the culprits, even if they shriek RACIST when exposed to sunlight.

2 comments on “Trump Points Out Baltimore is a Dangerous, Impoverished, Rat-Infested Hellhole Being Plundered by Corrupt Dems, Dems Respond By—and This May Shock You—Calling Him a Racist”