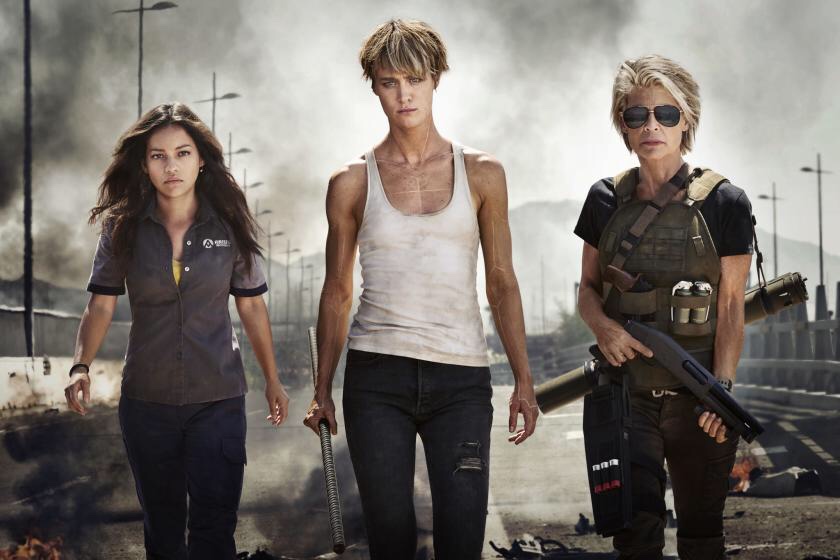 I don’t really pay attention to Hollywood anymore because nearly every movie they’ve churned out over the past half-decade has been awful, so I don’t know much about this new “Terminator” movie other than that it’s supposed to be an all-female “reboot” of the franchise. Once I heard that was the case I was even less interested in the movie than I otherwise would’ve been for any other new Hollywood release–which is to say already very uninterested.

Apparently Ahhnuld is in the movie, but he’s not the main hero of the story. The heroes of the story are a trio of #Empowered and #Badass women.

However, in a development that anyone with a functioning brain could see coming, this all-female Terminator movie completely bombed at the box office and is now projected to lose Paramount Studios $120 million:

“Sorry for fans of the Terminator franchise, but it may not be back again for a long time. “

Okay, but this is not “the Terminator franchise” anymore. It’s just a film that happens to share the name of the once-proud franchise.

“Terminator: Dark Fate opened at the U.S. box office this weekend and the results were nothing shy of abysmal for a massive budget blockbuster. The movie is guaranteed to be a big flop at this point. The only real question is, just how bad is it going to flop? Based on some new industry estimates, the sci-fi sequel could lose $120 million or more during its theatrical run.

According to a new report, Skydance Media, Paramount Pictures and 20th Century Fox stand to lose around $120 million in total, given the long-term prospects of Terminator: Dark Fate bombing at the box office. The movie, directed by Tim Miller (Deadpool) and produced by franchise creator James Cameron, made just $29 million in its domestic debut, which was far below industry estimates, which had it taking in around $40 million. Even that number wasn’t great, but it gave Sarah Connor and the gang a fighting chance.”

Now, will this financial disaster cause Hollywood to stop making all-female “reboots” of popular action franchises?

Of course not. Because the point wasn’t really to make money: the broader goal is to culturally disenfranchise men (specifically white men) by replacing them with with women wherever possible. And I’m not just talking about in movies–I’m talking about in politics, in the boardroom–in basically every high-profile position of power and every high-paying job. (They’re most certainly not trying to move men out of “dirty jobs” like garbage collecting, construction and logging. Only the well-paying white collar jobs.)

The point is to culturally appropriate all male-dominated sectors of society and shift them over to women. Hollywood is doing its part by taking popular movies that in the past starred male actors and “rebooting” them with all-female casts. The Ghostbusters movie (which also bombed), and “Oceans 8” are more examples. You’ve also got Disney shoehorning Captain Marvel in as the Most Badassest and Most Powerful Avenger.

The fact that these all-female “reboots” consistently lose money and yet Hollywood consistently keeps making them should tell you that making money is a secondary concern behind culturally disenfranchising men and re-shaping traditional gender roles in America.

Still, it’s nice to see that Americans are rejecting Hollywood’s forced cultural revolution by not going to see these terrible movies. Thankfully there remains a wide disconnect between the values of the degenerate elite and everyday Americans.